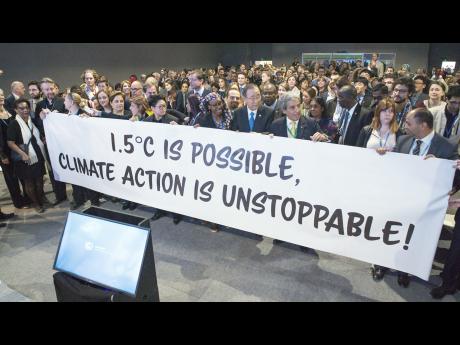 AS THE world continues the waltz towards a secure climate future, the 23rd global climate talks set for November in Bonn, Germany, is to be led by a small-island developing state (SIDS) - Fiji.

For some, this is a timely development and one that should help focus attention on climate-change adaptation, a priority for developing countries, including SIDS such as those of the Caribbean - more so than mitigation.

Adaptation refers to adjustments in natural or human systems aimed at reducing vulnerability to actual or anticipated climate change and variability, which include impacts such as rising sea levels, warmer temperatures and extreme weather events - notably severe hurricanes and droughts - to which islands of the Caribbean and other SIDS are particularly susceptible.

Mitigation, on the other hand, refers to actions that result in reductions to the degree or intensity of the emission of greenhouse gases (GHGs), such as carbon dioxide and methane, which fuel global warming associated with climate change. SIDS are not significant emitters of GHGs.

"It is the first time that the presidency of the COP (Conference of the Parties to the United Nations Framework Convention on Climate Change) will be from the SIDS: the island nation of Fiji and the PM (Prime Minister) will be the COP president. He was, in fact, at the last meeting of the subsidiary bodies that was held in May in Bonn, and said that there will be a strong focus on adaptation which is critical for SIDS," noted Clifford Mahlung, meteorologist and a man with the reputation as a seasoned climate change negotiator for Jamaica.

"But for almost any country now, developed or developing, the impacts of climate change are more pronounced and are happening on a more frequent basis. It means, therefore, that Jamaica and the other members of the AOSIS (Alliance of Small Island States) will be giving the presidency their full support, and it is hoped that the Jamaican delegation this year will include at least one minister of government," he added.

In February, the United Nations Framework Convention on Climate Change newsroom released the Fijian PM Frank Bainimarama's message in which he made his intentions clear.

"I intend to act as COP president on behalf of all 7.5 billion people on the planet. But I bring a particular perspective to these negotiations on behalf of some of those who are most vulnerable to the effects of climate change - Pacific Islanders and the residents of other SIDS countries and low-lying areas of the world. Our concerns are the concerns of the entire world, given the scale of this crisis," he said in the February 10 statement.

"We must work together as a global community to increase the proportion of finance available for climate adaptation and resilience building. We need a greater effort to develop products and models to attract private-sector participation in the area of adaptation finance. To this end, I will be engaging closely with governments, NGOs, charitable foundations, civil society and the business community," Bainimarama added.

Presidency of the COP, the supreme decision-making body of the convention, is subject to rotation among the five regional groups - African, Asian and Eastern European states; Latin America and the Caribbean; Western European states and other states, including Australia, Canada and the United States, among others.