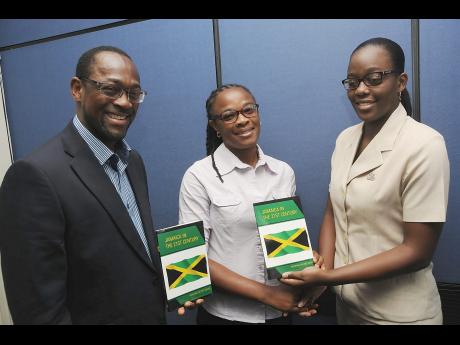 Lionel Rookwood
Sheree Rhoden (right), manager, Information Systems Department, Library and Archives, at The Gleaner, accepts a copy of the book 'Jamaica in the 21st Century' from essay writer Petal Thompson. Also in the photo is the author of the book, Dr Livingstone Thompson.

The Gleaner has long been a source of information into the rich historic, political, religious and cultural life of Jamaica, and last week's handover of two copies of Dr. Livingstone Thompson's book, Jamaica In The 21st Century, will certainly add to the company's impressive ability in preserving history, noted the media house's head of the Information Systems Department, Library and Archives, Sheree Rhoden.

"This addition to our library and archives is a great gesture, as we continue being the source of information in all areas of studies. I think it's critical that we preserve these rich historical content, as we have seen in this book," she said.

Thompson described the 111-page book as a "selective archaeological enterprise" of his commentaries published in The Gleaner and Sunday Gleaner newspapers between 2003 and 2007, adding that within its pages are realities that are still pertinent to everyday Jamaican life.

"The book is really a compilation of articles and columns which were written to The Gleaner, all except one. So the book symbolises the contribution that The Gleaner is making to public discourse, and in that sense it also symbolises how The Gleaner is contributing to the history of Jamaica," noted the author.

Dr Thompson lectured at universities in Ireland and is the former president of the executive board of the Jamaican Providence. He now has pastoral charges in Belfast and Hillsborough, Northern Ireland.

The book is dedicated to the late Reverend Dr Robert Cuthbert, a former president of the executive board of the Moravian Church in Jamaica (1981-1985). Cuthbert was shot and killed on February 24, 1985.