National Farm Queen on a mission 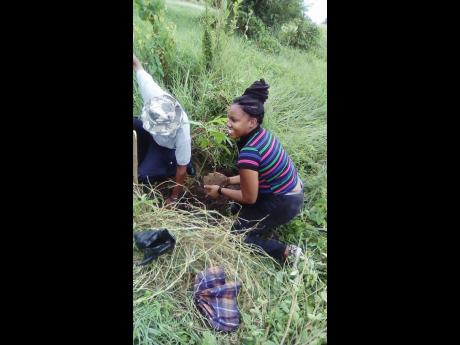 St Thomas' Truddiann Ashmead was the epitome of character and elegance coupled with intelligence and a thorough understanding of the agricultural sector, thus securing her place as the 2017 National Farm Queen competition held earlier this month during the annual Denbigh Agricultural and Industrial Show in May Pen.

Ashmead, who lives in Prospect, told Rural Xpress that she has always had a genuine interest in agriculture and believes it is the way forward where sustainable development is concerned.

It was with this in mind that she decided to enter the Nutramix-sponsored event.

"The National Farm Queen competition appeared the perfect platform to access the right information and networks to get to the point I envision, and I must say I am not disappointed. I have learnt far more than I bargained for ... the competition has the propensity to make well-rounded, powerful role models

Now endowed with a crown of responsibilities, the 25-year-old revealed that she is on a mission to point youth in the right direction to get access to the requisite information to establish and promote their agricultural ventures and to eliminate the label that only poor people become farmers.

"I cannot overemphasise how important it is for Jamaicans to see agriculture as a lucrative business and not a last resort. I will promote agro-processing as a viable option for business development, and I will definitely be promoting and highlighting women in agriculture. Networks already exist, the task is mine to get more women on board and to endorse policies and other media geared at eliminating gender biases as it relates to gaining access resources such as financing for agricultural development.

I will make my presence known by becoming the face of agriculture, thereby challenging stereotypes that only uneducated, poor persons are involved in agriculture; agriculture is for the older, more mature folk; women do not make good farmers; among other negative connotations," she said, adding that she herself also owns a few goats and pigs.

In a bid to reduce unemployment among St Thomas youth and to make more attractive the field of agriculture, the 2017 National Farm Queen encouraged established and successful farmers to come forward and share their experiences.

According to her: "The sector is not without challenges, but if we all make a concerted effort to be the change we want to see as we impact lives and be the driving force for sustainable development, the potential for the sector is limitless."

Ashmead indicated that though incentives are available to make the sector attractive, they are not being promoted.