Diary of the ghetto priest | Sin, forgiveness and prostitution 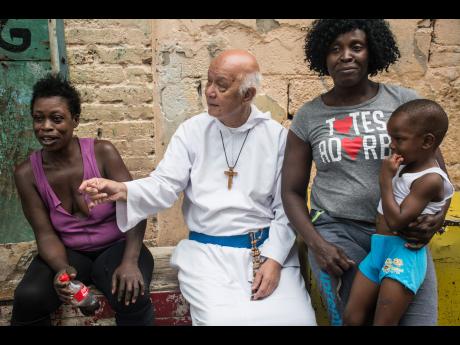 Our women struggle with their children. Father Ho Lung raps with them.

I will never forget Ruby. She lived on Mona Common in St Andrew, squatting with some 500 other families. She really was a Ruby of great price. She was quiet, gentle, smiling, but not without tragic lines along the corners of her lips. Then there were her eyes, mostly held downwards in humility. Unlike the other women - Beverley, Joyce, Rose, and Pansy - Ruby was never yelling and quarrelling and wanting to leave the Mona Common.

In fact, Ruby wanted to be there.

"I have to be here for the people," she shared.

Ruby had two children from two men. She was not married. She lived alone. She ran a little shop, selling single cigarettes, half pound of sugar, one pound of flour, a little rice, sweeties like paradise plum, sweet mints, donkey drops, and Bustamante backbone.

She was alone. She had no man. Ruby sent the children to school. It was a hard struggle buying books, uniforms, shoes, and having to pay school fees for Daniel and Elisha. At least the kids didn't have to pay bus fare. They could walk to and from school to Gordon Town, though it was a little lengthy.

She was "not a raw prostitute", as she explained to me. Sometimes she gave in because she was lonely or the man "talk nice to me". Other times she just needed money to send Daniel and Elisha to school.

Every Sunday, Ruby would go to church with a mantilla to cover her head.

She expressed, "I want Him, I want Him so badly. I want the Lord. I feel bad that I go to church, but I want to go to church. But me feel like a hypocrite."

"Yes Ruby, come to church. Don't stop coming to church. But you must stop sinning. It is not easy. If you love the Lord, you will stop. Show Him how much you love Him. You love Him more than anyone else in the world," I told her.

"You do wrong things and you lead people astray," I respond.

Shortly after that conversation, Ruby adopted two children that belonged to Rose. Rose had died of cancer.

"Why did you adopt these two children, Ruby?"

"Dem have no one to take care of dem."

"Ruby, you are too fool-fool. You lack prudence."

She brought out the little boy and girl, four and six years each.

She smiled and teased, "I'm gwine to have and come beg you. But I will take care of them, one day at a time."

She came to confession once per week. She always weeps and begs God for mercy. She is improving in her self-control.

Should she be allowed to go to Communion?

I remember the passage so well: "Even the tax collector and prostitutes will enter into the kingdom of Heaven."

This human flesh of ours, this need for material things, this passion of our flesh - we will never be exempt from it, not until we die. Thank God for His compassion, thank God for His death on the Cross.

It's difficult, but we must continue to say that wrong is wrong, and right is right. The truth is just the truth.

On the other hand, we must not condemn.

"May your many sins be forgiven you, for you have loved much. Go and sin no more."

How complex life is; how merciful is our loving God.

Let me add a last note. We must not condemn ministers of religion in Jamaica today. Chastise, but do not condemn. If we condemn we, too, will be condemned.

Whatever judgment we measure out to others, will be measured out to us.