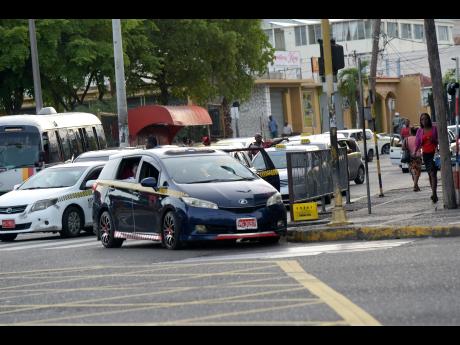 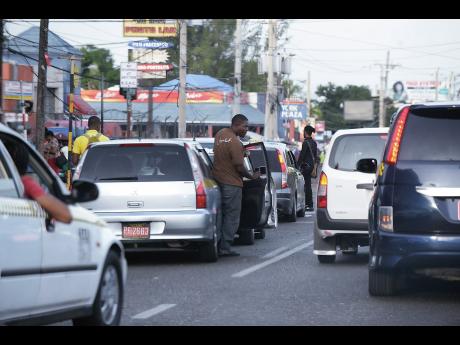 Ian Allen
Unruly taxi operators took over the turning lane from Hope Road to Half-Way Tree Road last Wednesday morning forcing other motorists to put themselves in danger as they make the turn. 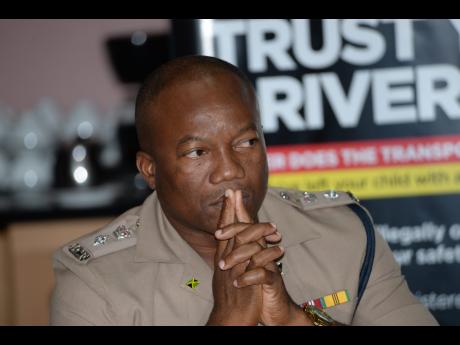 Unruly taxi operators are continuing to run riot across the Corporate Area, with the Half-Way Tree square underscoring the problem.

Among the more common practices of the taxi operators is their use of the two outer lanes of Hope Road in the vicinity of the National Commercial Bank as an unofficial parking spot, as they pick up or let off passengers early mornings and late evenings.

Another new norm on the roads is taxi operators using filter lanes or making third lanes to cut in front of other motorists at major intersections.

Last week, Senior Superintendent Calvin Allen, head of the Police Traffic Division, told The Sunday Gleaner that his team was well aware of the annoying and often illegal activities of these taxi operators and will be using various strategies to prosecute them.

"Half-Way Tree is an area that we are going to show visible presence and effective policing," said Allen.

"We have carried out covert operations where several of those taxi men who cut across in front of persons at the intersections have been prosecuted, and that will continue," added Allen.

He stressed that it is not for a lack of effort on the police's part why these unruly taxi operators continue to avoid prosecution.

According to Allen, a few weeks ago the police seized more than 50 vehicles between Half-Way Tree and Cross Roads in St Andrew, while in the space of a month more than 22,000 tickets were issued in the same area for various breaches of the Road Traffic Act.

But with more than 10,000 vehicles traversing Half-Way Tree daily and thousands of commuters using the busy commercial area daily, Allen said the area presents a particular challenge for the police.

"One of the things we find with operators in Half-Way Tree is that while their road licence speaks to them operating in three parishes, to include St Catherine, everybody journeys into Half-Way Tree and so it further clogs the already limited operating area that exists. This presents part of the challenge that exists in that regard," said Allen.

"There are some other players that are critical in the zone in terms of order. We are seeing some vending occurring in the zone that is not properly ordered and so we are in discussions with the relevant local authority in terms of reviewing some of the permits that they would have given. In a lot of instances, some of these vending persons have robbed the commuters of walking space.

"The KSMC (Kingston and St Andrew Municipal Corporation) is now fine-tuning and training some municipal police because municipal police used to be in the area. they have not been there for quite a while to assist with the law and order issues in Half-Way, but encouragingly, these police should roll out before the end of the year," added Allen.

1,742 from road policing activities by the traffic division.

1,778 registration plates removed: 3,200-plus from vehicles that have been found to be defective.

More than 10,300, mainly to public passenger drivers and conductors.

Nine firearms and more than 100 rounds of ammunition.

In one police check, two firearms and 49 rounds were seized and three men were arrested.

One of the persons arrested was wanted by the police for more than eight murders.