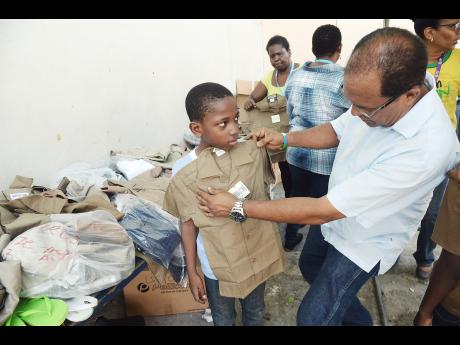 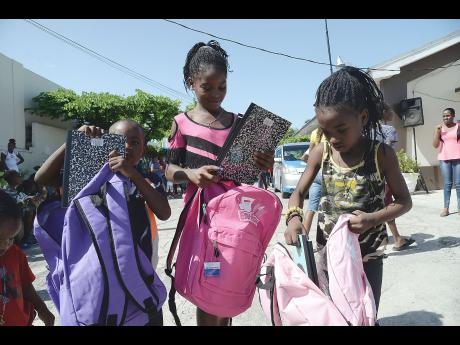 Jermaine Barnaby
From left: Cyere Dyer, Nadive Mullings and Chardonay Walker check the back-to-school supplies given to them at the Hope Gospel Assembly fair last Saturday.
1
2

When Reverend Dr Peter Garth called a shipping agent last Monday to check on his package of 2,512 bags to host the Hope Gospel Assembly annual back-to-school fair, he was told that it would be impossible to get the shipment in time for the event slated for last Saturday.

Now Garth is convinced that God worked a miracle which allowed him to receive the package last Thursday so the fair could take place as scheduled.

On Saturday, hundreds of children, some from as far as St Ann, were treated to the annual fair.

Garth, who is the senior pastor at the St Andrew-based church, was overjoyed as he said that despite the pressure that the planning committee encountered in the last two weeks, their efforts were not in vain.

"We know that the kids who have come are kids who are really in need. We are very proud of these children, because some of them are coming from in the 30s and the 40s (grades). Today, we have a number of children here who are in the 90s and the high 80s," Garth told The Gleaner.

"We have three satellite areas that are having fairs as we speak. There are two communities in St Ann and last year we gave to Trench Town (in South St Andrew). I want to encourage our children to continue to strive for excellence, but having the glory of God in view," he continued.

Theresa Walters from Cassava Piece in St Andrew was one of many persons who benefited from the Hope Gospel Assembly back-to-school fair last Saturday, and the mother of three has nothing but praise for the organisers.

Walters told The Gleaner that the donations from the church helped her with some of the expenses she had to take on over the years.

"I'm thankful for it. Some children don't even have a school bag and my children got bags. My son even got school shoes. I hope other persons will take advantage of it and do what they need to do. I don't even have to buy a book, and I'm grateful for the help," said Walters.

Another parent, who gave her name as Sasha-Kaye, said the donations could not have come at a better time, as she is unemployed.

"It helps a lot, because I'm not working. It was the same thing last year - I was out of job. However, I am able to help my daughter with [going] back to school, for example, purchasing her textbooks, because she got a scholarship," declared Sasha-Kaye.

And, if Reverend Dr Peter Garth has his way next year, parents in Clarendon and St Mary will join their counterparts in the Corporate Area in getting back-to-school help from the Hope Gospel Assembly.