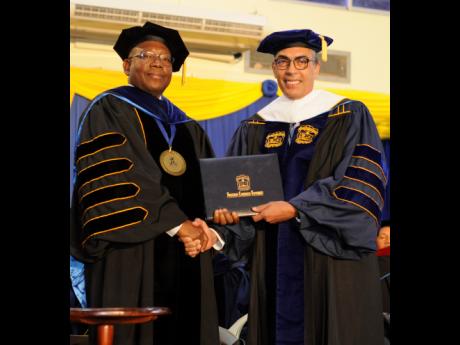 Byles received his award during NCU’s 94th commencement ceremony at the institution’s main campus in Mandeville, Manchester on August 13.

“I am honoured by the recognition of Northern Caribbean University, a noble institution with a rich and lasting legacy of contributing to Jamaica’s economic development through the thousands of persons it has trained in multiple academic disciplines and importantly, its passion for character and nation building,” a release quoted Byles as saying.

Byles served as President and CEO of Sagicor Group Jamaica for 13 years, retiring from the post in May this year.

In addition to his role as Chairman of Sagicor Group Jamaica, Byles also chairs the board of Sagicor Bank Jamaica Limited and Sagicor Real Estate X-Fund Limited.

He is the current Chairman of Red Stripe Jamaica, a Director of Pan Jam and a member of the Council of the University of the West Indies. He is also the former co-chairman of Jamaica’s Economic Programme Oversight Committee.