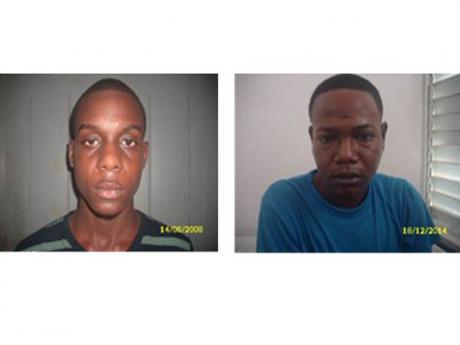 Nicholas Massop (left) and Renardo Williams remain on the run

The police are continuing the search for two of the five prisoners who escaped from the Ocho Rios Police Lock-Up in St Ann on August 11.

Laud who was wanted for illegal possession of a firearm was held during a pre-dawn operation in St Mary.

Massop is wanted for murder, shooting with intent and illegal possession of a firearm.

He is believed to frequent Boscobel, St Mary and Spanish Town, St Catherine.

Williams, otherwise called ‘Tanty’ is wanted for illegal possession of a firearm and ammunition and is believed to frequent the Ocho Rios area.

The police are urging these men to turn themselves in and are reminding family members and residents that it is an offence to harbour a criminal.

Anyone with information on the whereabouts of these escapees is being asked to contact the Ocho Rios Police at 974-2533, Police 119, Crime Stop at 311, 811 or the nearest Police Station.

Forty-eight-year-old Gary Ferguson of Dunsville and 29-year-old David Anderson of Drax Hall, both in St Ann were recaptured on Friday, August 11.