UPDATED: I need a break - Morris Sommerville seeks assistance to transform his life 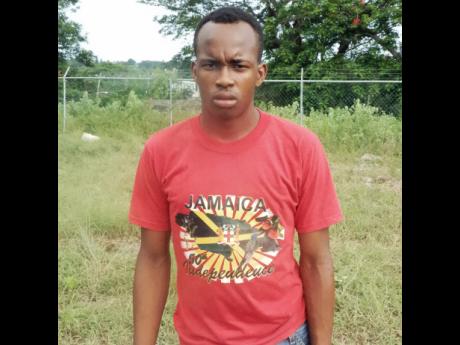 MAY PEN, Clarendon: When he was in grade six, Morris Sommerville who is now 20-year-old had to watch his father suffer with HIV/AIDS.

Three years later, while a grade-nine student of Four Paths Primary and Junior High School, Sommerville had to deal with the same situation - this time, it was his mother - the woman he felt would always be there for him. He admits to feeling helpless and torn as she, too, suffered and eventually died from complications associated with the disease.

"After that, my younger brother lived with relatives while I took care of myself," he told Rural Xpress.

He said he roamed the streets trying to make an honest bread by pushing handcarts, selling bag juice - anything that would ensure that he got the money to attend school - albeit irregularly.

"I determined a long time ago that I wanted to be a better man. Just because my parents passed didn't mean I was going to follow the wrong path. I wanted to be a good example for my younger brother," he said.

One Saturday, his life was changed forever when gunshots rang out in the market. He was shot in the foot, and that incident highlighted that he had been living on the streets.

"Social workers from the Child Development Agency got involved and I was sent to the St Augustine Place of Safety, where I attended school," he said, admitting that what he thought was bad turned out to be good as he could not read at the time and going to school full-time turned out to be a blessing.

After being transferred to two more boys' homes, Sommerville, at the age of 17, decided that he wanted to sharpen up on his carpentry and tailoring skills, and he enrolled at the BB Coke High School, where he did carpentry and garment construction.

In July, Sommerville was released from the children's home and he returned to an empty house filled with haunting memories on Paisley Avenue where he grew up.

Having almost completed his fashion designing course at the Old Harbour Vocational Training Centre, he says all he wants now is a break.

"Life has dealt me some hard blows, and just for once, I would love to see things go my way," he said as he shared that he would like a second-hand Singer sewing machine and some ply wood or even a container, where he could set up a tailor shop.

"I would love the chance to help myself as well as my younger brother," he said.

Sommerville said he is determined to forge ahead, as there are times when he feels hopeless, but he thinks about his mother and is revived.

"I am past cursing my luck, right now, I am just looking ahead and hoping that somehow, somewhere, someone's heart will be touched to assist me in getting the start I am so earnestly seeking," he said.

Note: This story was edited to indicate that Sommerville's father died when he was in grade six, not when he was six years old.