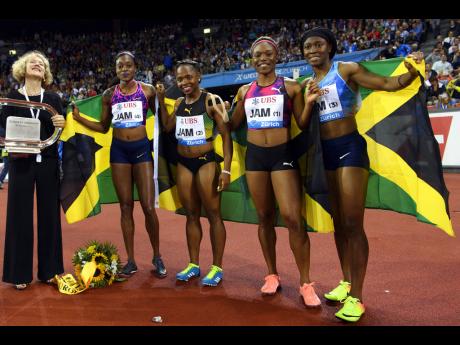 ZURICH, Switzerland:
Elaine Thompson had to settle for second place in the women’s 200m event, which was won in a Bahamian record 21.88 seconds by Shaunae Miller-Uibo on a day where the Jamaicans drew blanks at the first of two IAAF Diamond League finals at the Weltklasse Zurich meet inside the Letzigrund Stadium.

That race produced one of several exciting finishes at the event, where 16 Diamond Race champions were crowned on Thursday. The series will come to an end at the Brussels Diamond League on September 1, where another 16 athletes will walk away with US$50,000 and the Diamond Race trophy.

Third place in the women’s 200m went to Marie-Josee Ta Lou, 22.09 with the other Jamaican in the event Simone Facey taking seventh place in 22.80 seconds.

Thompson and Facey returned a few hours later to help Jamaica to a win in the Zurich Trophy women’s 4x100m invitational with Christania Williams and Jura Levy completing the team that clocked 41.85 to edge Great Britain and Northern Ireland, 41.86 into second place with Germany, 43.32 taking third.

Meanwhile, Miller-Uibo said she was thrilled with her 200m win and the national record and noted that she will be focusing on the Commonwealth Games in Gold Coast, Australia in 2018.

“My coach really wanted me to come here and run a fast time and that’s what I did. I am really pleased with the times I’ve been able to run in the 200m especially considering that we didn’t really focus on it too much in training,” said Miller-Uibo after her win.

Asafa Powell in the 100m and sprint hurdler Danielle Williams also found the going tough in the Swiss city with Powell running fourth in a time of 10.11 seconds as Great Britain’s Chijunda Ujah, 9.97 seconds ran away with the Diamond Race title. Youssef Ben Meite, who also clocked 9.97 was second with Ronnie Baker, 10.01 running third.

Williams got left in the starting blocks and had to run her way back to finish fourth in 12.73 seconds behind winner Sally Pearson, the world champion, who edged American Sharika Nelvis after both had clocked 12.55 crossing the line. Christina Manning, 12.67 was third.

In the triple jump event, Kimberly Williams had to settle for fourth place with a best mark of 14.41m with the Diamond Race title going to Kazakhstan’s Olga Rypakova, who landed 14.55m in the sand. World champion Yulimar Rojas, 14.52m was second with Caterine Ibarguen, 14.48m taking third place.

Mo Farah, who was honoured by the Swiss crowd with a choreography before his contest, was pushed to the line but eventually got the men’s 5000m win in 13:06.05 over a diving Paul Chelimo, 13:06.09 and Muktar Edris, who matched Chelimo’s time.