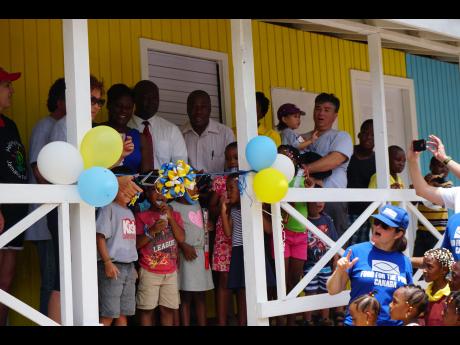 Janet Silvera
Glenor Josephs (left with scissors in hand) gets ready to cut the ribbon, officially declaring the new infant department attached to the Lower Buxton Primary in St Ann open. Participating in the occasion are teachers, students, family and staff.

Jamaican-Canadian owned company, Kisko Products, has gifted the people of Lower Buxton in St Ann with a basic school valued at $7.6 million.

The school - which will house over 33 students, three classrooms, an office, a sick bay, a fully equipped kitchen, dining area, as well as student and staff bathrooms - was constructed with the help of Food For The Poor and Helping Hands Jamaica, which is also based in Toronto, Canada.

The early-childhood education institution is part of the Lower Buxton Primary School Infant Department and was constructed in three days with the help of Kisko staff who travelled all the way from Canada to assist with the project.

"As Christians, we are called to give back," president of Kisko, Mark Josephs told The Gleaner, explaining that he and his family are setting a firm foundation in relation to Jamaica's early-childhood education.

"We are doing our part in the society, because we have been blessed and are also privy to the impact that education has had on the lives touched."

Their inspiration has spread to its staff members, moving them to give back. Josephs and his mother Glenor are hoping other Jamaican-owned companies doing well overseas will be inspired to participate in positive projects that have the capacity to make a difference to the lives of the less fortunate.

"It was heartening to be able to change the environment that the students had become accustomed to. Many were unable to attend school, because there was no space for them. That no longer exist with this new facility," stated the matriarch of the 40-year-old organisation.

Their efforts were lauded by Food For The Poor's project coordinator, Marcus Irons, who said the company had come this far because of their faith in God and the entrenched belief that it is not all about making money.

Chairman of the school board, Jasper Lawrence, described the gift to the community as Christ-like compassion, one that transcends barriers.

"This investment is not only in the structure, but in the quality of life of generations to come," stated Lawrence, adding that the greatest appreciation the beneficiaries could show is to genuinely care for the facility.