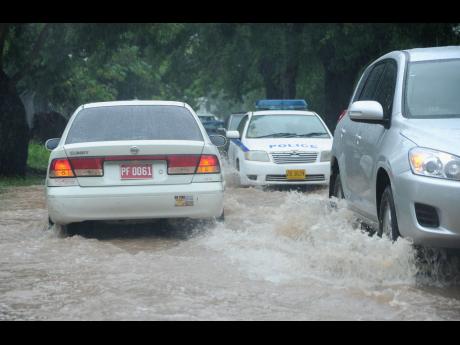 Ricardo Makyn
In this file photo, motorists wade through the flooded Mona Road in St Andrew.

Member of Parliament (MP) for St Andrew Eastern, Fayval Williams, is appealing for patience in traversing sections of the Mona area as major infrastructure work is under way.

There has been a noticeable build-up of traffic in the area since work started in June, driving concerns among some about traffic jams come September when schools reopen. Institutions located in the Mona area include the University of Technology, the University of the West Indies (UWI), Mona High School, and Mona Heights Primary, among others.

However, Williams said the multimillion-dollar project is necessary to correct the problem of flooding which often occurs when it rains on Mona Road.

She said a part of the undertaking involves the road being sloped differently to allow for the run-off surface water and the installation of drainage pipes and sidewalks along the busy thoroughfare which leads to UWI.

"It's a significant project. Major drain pipes are being laid, light poles will have to be moved, and some parts of the existing embankment will have to be cut away to help facilitate some of the work," Williams said.

The overall benefit of the project, according to Williams, is that there will be no more major flooding in the area, which makes it sometimes impassable for motorists.

"It will eliminate the uncertainty as to what that the road will look like when it rains," the MP argued.

Williams said she recently visited the work site and is pleased with the progress.

She is also appealing to motorists to find alternate routes and avoid the area if they can until the work is completed, which is expected to be in September.