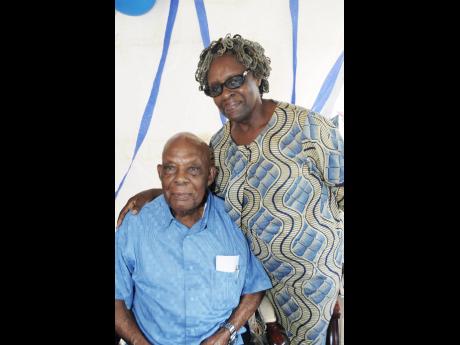 He is as sharp as ever, following a daily routine of reading books and engaging in active conversations with family and friends.

An ardent worker in the Church and in the business of impacting the lives of those he hasn't even met, 103-year-old Robert Kennedy was recently hailed and celebrated during a special function.

The day also saw the celebration of the 11th anniversary of the Ken's Health Care Home for the Elderly, which Kennedy initially built as a house for his extended family.

A man, whose devotion to God and family is immeasurable, was affirmed by Lady Allen, who gave the keynote address.

"Congratulations to you for living an exemplary Christian life and for batting beyond a century. I think the West Indies cricketers would like to have your score," Lady Allen said cheerfully.

She added: "There is no winning formula for accomplishing these feats, but if I recall the scripture, 'Honour thy mother and thy father', the only commandment with a promise of long life, Father Kennedy's life is a true testament to living by biblical principles and nurturing the gift of family."

Lady Allen noted that the Kennedys should be commended for establishing and strengthening a principled foundation for their family.

Kennedy lost his father at age 13 and soon after, left all-age school to work and take care of his mother and other siblings.

"He got married to the late Mary and had 10 children. He was first a farmer, then a carpenter. There was no job too small or too lowly for him to do as his intent was to take care of his family at all cost," said his daughter, Marlow Francis.

"He instilled in us that we must first love God with all our heart and with all our might, and then he said we must get a good education," said Francis.

Kennedy travelled to England and Canada to work and retired in Jamaica in the '90s and built a house for his extended family. The house was retrofitted and named Ken's Health Care Home for the Elderly.

A 27-bed facility with 22 members of staff, the home has received recognition as a centre of excellence in caring for the elderly. It also provides internship opportunities for students in the field.