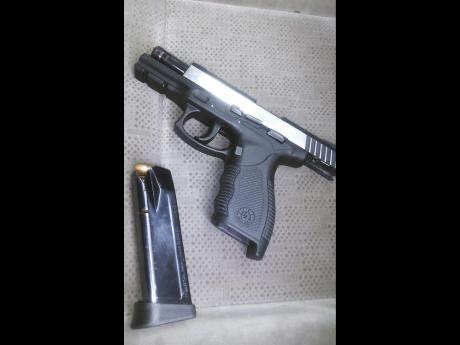 Three firearms and several rounds of ammunition were seized by the police yesterday in separate incidents.

Two persons were arrested and charged as a result.

The first seizure occurred about 2:00 p.m., in Friendship Pen, Morant Bay, St Thomas. After receiving reports that strange men were seen in the area, lawmen went in search of them.

During the search, one Smith and Wesson Parabellum 9mm pistol containing two 9mm rounds of ammunition was found in bushes. No one was arrested in connection with this seizure.

In the second operation in the St Andrew South Division, one 9mm Browning pistol fitted with a magazine containing nine 9mm rounds of ammunition was seized when lawmen on patrol saw Lemond acting in what they describe as a manner that aroused their suspicion.

He was accosted, searched and the firearm taken from his person. He was subsequently arrested.

The third seizure occurred during an operation in Salter’s Hill, St James about 7:00 p.m. The police were on mobile patrol in the area when Taylor was seen riding a motorcycle along the roadway.

He was accosted and a searched and one Jimenez ARMS pistol containing a magazine with two live 9mm cartridges was taken from him. He was subsequently arrested and charged.

Taylor is scheduled to appear before the Western Regional Gun Court on Thursday, September 7. Lemond’s court date will be announced at a later date.