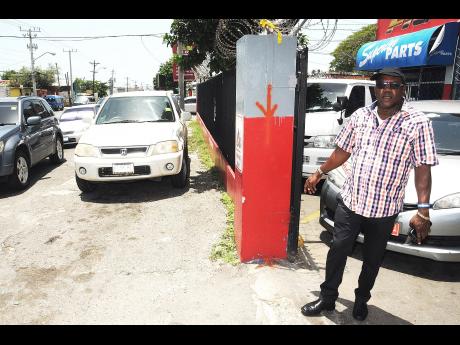 Lionel Rookwood
Derrick Johnson, CEO of Superior Parts, shows the marking which indicates how much the widening of Hagley Park Road will impact his business. 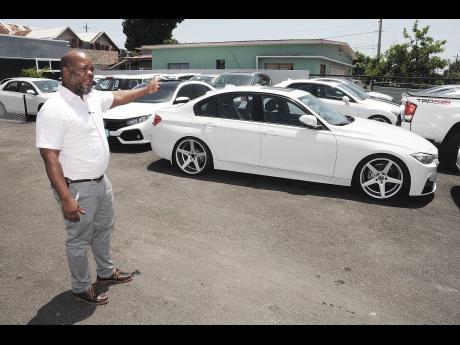 Lionel Rookwood
Kirk Scott, managing director of Scotts & Co Auto Sales Services Ltd, points to the amount of space he will lose as a result of the widening of the road. 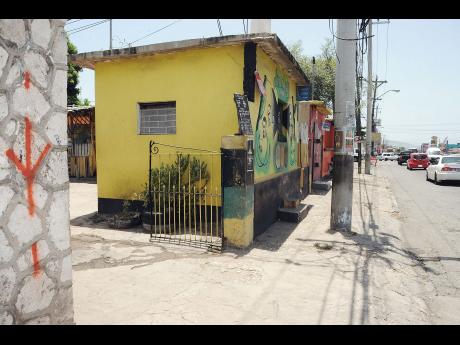 Lionel Rookwood
Devon Lee is worried that he will not be compensated for the building which houses his shop. 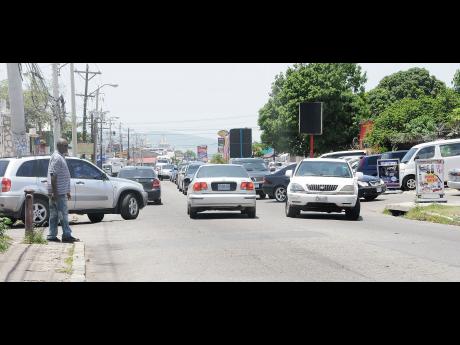 While business and home owners along Hagley Park Road in St Andrew have accepted the need for the widening of the roadway, there are growing concerns about the negative impact it could have on sales as several entities are slated to lose large portions of yard space, parking bays, perimeter walls, and other fixtures.

The National Works Agency is leading the project to widen the 3.3 kilometres stretch of Hagley Park Road, from its intersection with Spanish Town Road to where it joins Maxfield Avenue in Half-Way Tree.

The road will be made into four lanes with the construction of sidewalks, the installation of more street lights, and the introduction of traffic signals at several intersections.

Last week, most of the business owners along the roadway who spoke with our news team, expressed concern about how the development will affect their businesses.

Markings have already been made along the roadway indicating the amount of property that will be acquired from each premises as the Government acquires the space for the road widening.

A combined total of 255 square feet of property is set to be acquired from two premises which house Crichton Automotive Limited, and the managing director of the car dealership, Kirk Crichton, believes this will be a major blow to his business.

"Just the nature of the business requires land space, and (based on) what they are cutting off, we are going to lose about 30 parking spots, so it is going to affect us big time," Crichton lamented.

While the Government will compensate owners for the lands acquired, CEO of Superior Auto Parts Limited Derrick Johnson does not believe the money will make up for all the adjustments he and others are going to have to make.

This was echoed by Crichton, who argued that the State should compensate them for more than the value of the property they will lose.

"I understand that the price of progress is that you have to widen the road, but compensation is an issue for me," said Crichton, "because paying for the land alone is not a true reflection of what it is going to cost us."

In the meantime, Devon Lee, who is the proprietor of a small shop on the road, is worried that he will not be paid for the structure, which was built three years ago on property not belonging to him, but which he has occupied for more than 30 years.

"Even if the Government buys the property, I would hope they would compensate me for the shop because a $700,000 mi pay fi build mi shop about three years ago," said Lee. "So mi a go si if the system a go encourage positivity."

Eighty-year-old house owner Phillip Coombs is already seeing his livelihood being threatened as two of his tenants have indicated that they will be moving out as soon as the roadwork begins.

"Nobody is going to want to rent the house again. It is going to (be) condemned, and is that I am living off because I don't have any income," said Coombs, who is bedridden.

He showed our news team information written down by persons who visited the premises to do the markings that indicates that the widened road will be four feet from his veranda.

"I am worried that the drilling and thing going to shake up the house and damage it and those big buses and trucks that going to pass four feet from my doorway.

"So the business owners not going to feel it like me as they can lock up their place and leave. I don't have anywhere to go," said Coombs.

While the business owners said they have heard that the roadwork will begin in December, Acting Communications Manager at the National Works Agency Janel Ricketts pointed out that the plan was in the very early stages, with a contract yet to be awarded.

But Kirk Scott, director of Scott & Company Auto Sales & Services Limited, is hoping that when work gets under way, it will be properly managed and completed on time.

"I hope they do it in proper phases and control and do it quickly because if this take a year, my business is going to mash up because people have limited time to spend," argued Scott.