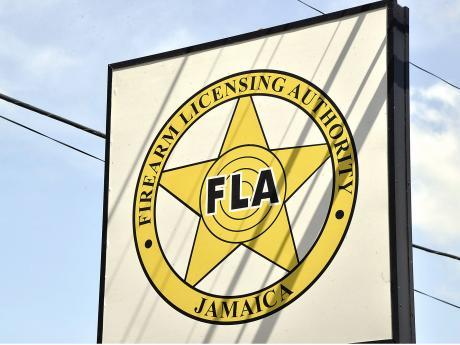 The Firearm Licensing Authority has revealed that the Major Organised Crime and Anti-Corruption Agency (MOCA) is currently reviewing more cases than were initially reported.

Last week, it was reported that MOCA had been probing 257 "suspicious" files.

But this morning, in a statement detailing the time line of activities since the unveiling of the firearm permit scandal, the FLA said other files have also been turned over to MOCA.

However, the FLA did not say how many others.

The authority also reported that more than the three people initially reported have been separated from the agency.

According to the FLA, a total of six people are no longer with the agency.

It said in the first instance, one member was terminated, one who was on secondment returned to his original place of employment and the third, by mutual consent, was separated from the FLA.

In the second instance, the FLA said the contract of an employee in western Jamaica was terminated and two others entered into separation agreements.

The FLA has been under scrutiny since it was revealed that people of questionable character including ex-convicts have been getting gun permits.

It is also reported that firearm holders have been paying bribes to get their licenses.

November 2016 - the Dennis Wright-led board started a programme of review of some gun permits.

February 2017 - the then board met with the Police High Command to seek assistance in investigating some of the suspicious permits. One particular case put forward for immediate attention.

April 2017 - Board introduces a vetting policy for Senior Staff to include background checks and polygraphing. Some staff members objected and entered board Subcommittee meeting under controversial circumstances.

May 2017 - Board met with Major Organized Crime Anti Corruption Agency (MOCA) and sort help with suspicious files now numbering 257, of which 100, was to fast track and handed over. MOCA was invited to be a part of the vetting process for new applications.

May 2017 - Letter from Whistle Blower staff member received. Internal investigation and actions on allegations started by the Board.

June 2017 - Gun Amnesty starts. It allows individuals to regularize weapons for those who had not renewed their licenses. The Amnesty was to end on July 31, 2017.

June 2017 - Dennis Wright led Board met with Police leadership in Western Jamaica. All concerns of the police about persons who they had issues about were to be forwarded to the Board.

June 2017 - After four months, the Police High Command supplied information on applicant that was asked for in February 2017.

July 2017 - The Board based on information supplied by the Police revoked said licenses. In addition, certain licences approved 2016/2017 were revoked (Some information was not made available at the time of the approval). Further checks revealed that the notification of revocation was deliberately stalled.

July 2017 - Further checks revealed a scheme that was being operated by some staff members who approached licensed firearm holders, took their guns and ammunition and then extorted them. Some of these guns and ammunition were improperly stored at the Authority.

July 2017 - A search of a particular department at the Authority, a missing file connected to the 'X6' murder trial was found (not the Patrick Powell file)

July 2017 - Applicants whose licences were approved, notices were held. The applicants were called and money demanded from them to speed up the process (although they were already approved)

July 2017 - The Board reviewed the above mentioned discoveries and sent them to be further investigated and actioned.

July 2017 - Board met again. Reaffirmed programme of reform and transformation and planned a September management retreat.

July 2017 - Letter from police leaked to the press.

July 2017 - Board Chairman invites MOCA to investigate allegations. Board Member recuses himself to allow the internal investigations to be unhindered.

August 2017 - One senior staff member had his contract terminated; one member who was on secondment, returned to his organization and one by mutual consent, was separated from the Authority.

August 2017 - One member of staff in western Jamaica had contract terminated. Two other staff members, by mutual consent entered in to separation agreements.

Firearm Licensing Authority (FLA) Reform Agenda
The Reform Agenda of the Dennis Wright led board will be continued to be implemented with vigour.

Some of the initiatives that will continue to be implemented are:

1. The reorganization of the Authority will be done with respect for all.
2. The re classification, training and re engineering of processes will be fast tracked.
3. The re introduction of the Gun License Examination. This will commence in September.
4. The review of all files to clear the system of permits that should not be issued.
5. Introducing MOCA into the vetting process.
6. The vetting of all staff members including polygraph testing.
7. The installation of a finger print terminal at the FLA.
8. The confiscation of all guns in storage beyond the legal time.
The JCF and the JDF will be invited to examine and use any and the Jamaica National Heritage Trust (JNHT) will be asked to review any for historic value. ll others will be sent to the JDF to be destroyed. This process had already started (June) and ends end of September.
9. Supplying the JCF with a list of persons who have not renewed the permits during the Amnesty which ended in July (list is now complete to be handed over shortly).
10. The programme of review of all Firearm Trainers will be continued and despite objections the board policy of annual certification of trainers will be implemented.
11. The separation of new applications department from the operation of the Review Board will lead to better protection and confidentiality.
12. The review of the Firearm Act and regulations to close gaps and modernize the law is soon to be completed.
The package of reforms passed by the Dennis Wright led board will be implemented, without fear or favour.
Until further advised this is the Programme of Transformation that will be pursued by the FLA board at this time.

Appointment of the New Board
The statutory process for naming a new Board for the Authority is well advanced. The identification of suitable persons and their consent;
Consultations with stakeholders both local and international;
Vetting and background checks;
Are all a part of the process.
We acknowledge the anxiety of some, but seek your patience as the steps must be observed not rushed. Rest assured the process is well advanced.
We assure the public and our customers that the service they have come to expect will continue. We apologise for any inconvenience and seek the public's full cooperation as the transformation and reform takes place.