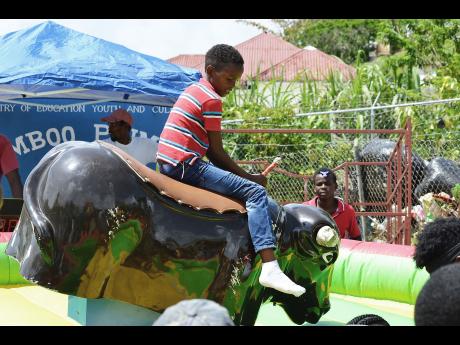 'Free paper bun' isn't usually a good sound for kids on summer break as it means holidays are over. However, for the scores of children who turned out at the Bamboo Primary School in St Ann last Saturday, it was a joyful occasion as they were treated to a day of fun-filled activities and school supplies, just in time to the new school year.

Staff sergeant with six years' service in the United States army, Easton Savery, and his good friend, Raycion Rumble, who both emerged from this north-west St Ann community, decided it was good to give back.

Rumble said Savery called him on the phone to pitch the idea and he agreed and within five minutes, much to Rumble's surprise, Savery posted something on facebook page.

"We remember back in the day we didn't have much and we know what it feels like to go to school and not have a bag, and so forth. That's how it came about. It's a treat for the kids, but it is more than that," Savery pointed out. He explained: "We're trying to boost morale. crime taking over Jamaica; we just don't want to stand by and watch, we want to be proactive in our community, so this is the start of a new initiative to bring hope to our community. The kids are actively engaged, everything is free for them, they're enjoying food, rides, we have prizes, face painting, interactive games, bags, books, school supplies."

The children were out in their numbers, prompting fears, initially, that the supplies would not stretch. In the end, though, each child left with something that was worth their turning up for the event.

It was a satisfying feeling for both Savery and Rumble, and their moms, too, Enette Savery and Rosemarie Rumble.

Said Savery: "It's amazing, the support we got. It's not just the kids that came out, but the parents and the older folks, folks who were very vital in our upbringing, they're here as well, and it means a lot. I want to say thanks to all who made this possible, like the US army, my friends, they came out in numbers, donating through our go fund me account, sending bags, people from our community, we couldn't do it by ourselves. It's a team initiative, even strangers contributed towards it."

Added Rumble: "We never expected this huge turnout it surprised us, but we have to let everybody know this will be a calendar event, a year-to-year thing."

The two men have made their mothers proud.

"I am so proud of him," Enette Savery said of his son, Easton.