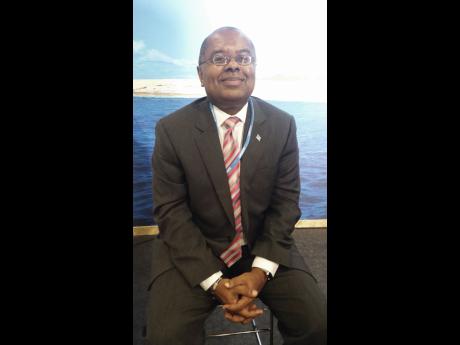 AS THE 23rd global climate talks near, Caribbean and other small-island developing states (SIDS) are advised to boost their lobby for adaptation funding and enhanced commitments to reduce greenhouse gas emissions.

The recommendation has come from Dr James Fletcher, former head of the CARICOM Task Force on Sustainable Development and one of the region's stars in the international negotiations on climate change.

"SIDS need to call for increased ambition on mitigation from developed countries so that the increase in global temperature can be limited to no more than 1.5 degrees Celsius," he told The Gleaner.

"They need to agitate for greater and easier access to public funds for critical adaptation actions that must take place immediately in all climate-vulnerable countries," added Fletcher, who was also a senator and minister for sustainable development for Saint Lucia.

Caribbean SIDS, for example, are especially vulnerable to climate impacts, notably sea level rise and warming sea surface temperatures, that could put fishers and farmers out of business while knocking out critical sectors such as tourism, which rakes in millions in foreign exchange annually.

Severe weather events, such as stronger hurricanes and extended droughts, also represent a challenge that requires urgent adaptation actions for which external financing is required, given the islands' struggling, small economies.

The presidency of the talks referred to officially as the Conference of the Parties (COP) to the United Nations Framework Convention on Climate Change will for the first time be held by a SIDS, Fiji, presenting a unique opportunity for such states, which include Jamaica.

"The SIDS presidency of COP is very significant symbolically as it allows the group of countries that are most vulnerable to the impacts of climate change to chair the proceedings where the rules set of the Paris Agreement are being developed," Fletcher said.

"Also, the presidency comes at a time when the Parties (countries) are preparing for the 2018 Facilitative Dialogue, which is supposed to allow for a stock-take of the efforts of Parties toward the long-term goal of the Paris Agreement and the preparation of new or updated NDCs [nationally determined contributions] by 2020," he added.

These initiatives are important for SIDS, Fletcher said, because "they speak to global commit-ment to increase ambition to limit the increase in temperature to no more than 1.5 degrees Celsius".

"Hopefully, the SIDS presidency will ensure that the urgency of action in reducing global greenhouse gas emissions is increased, while at the same time renewing efforts to mobilise and make available climate finance to SIDS and other climate-vulnerable countries so that they can adapt to the impacts of climate change," he noted.

The publicised priorities of the Fijian prime minister and COP president Frank Bainimarama would seem to line up with Fletcher's advice.

"We must work together as a global community to increase the proportion of finance available for climate adaptation and resilience building," he said in his February 10 statement on the COP to be held in Bonn, Germany, in November.

"We need a greater effort to develop products and models to attract private-sector participation in the area of adaptation finance. To this end, I will be engaging closely with governments, NGOs, charitable foundations, civil society and the business community," Bainimarama added.

He subsequently articulated Fiji's vision for COP 23 as including "to harness innovation, enterprise and investment to fast-track the development and deployment of climate solutions that will build future economies with net zero greenhouse gas emissions, in an effort to limit the rise of global temperatures

to 1.5 degrees Celsius above pre-industrial levels.

Also forming a part of the vision, the prime minister said, is "to uphold and advance the Paris Agreement, ensure progress on the implementation guidelines and undertake consultations together with the Moroccan COP 22 Presidency to design the process for the Facilitative Dialogue in 2018".

He was addressing delegates at the start of the closing plenary of the climate change conference on May 18 in Bonn.