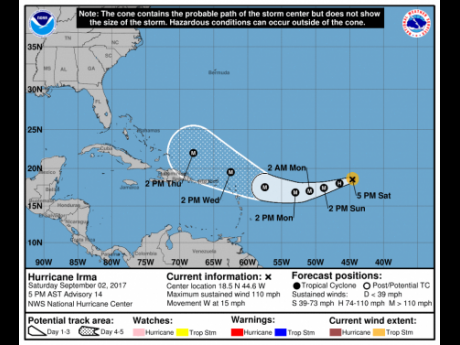 The cone contains the probable path of the storm centre but does not show the size of the storm. - nhc.noaa.gov

BRIDGETOWN, Barbados (CMC):
Residents in several Caribbean countries, particularly those in the Leeward Islands, have been told to keep an eye on the progress of Hurricane Irma that is moving towards the Lesser Antilles as a Category Four Hurricane.

Disaster preparedness officials were urging the public to monitor the progress of this storm through official updates and update family preparedness plans and undertake required activities in accordance with that plan.

The Miami-based National Hurricane Centre (NHC) said that Irma, packing winds of 115 miles per hour (mph) “is expected to remain a powerful hurricane through the weekend.

According to the 5 a.m. (local time) bulletin issued by the NHC, the storm was located about 1,665 miles east of the Leeward Islands and moving at 12 mph.

“Irma is a category 3 hurricane on the Saffir-Simpson Hurricane Wind Scale.  Fluctuations in strength, up or down, are possible during the next few days, but Irma is expected to remain a powerful hurricane through the weekend,” the NHC said, adding that hurricane-force winds extend outward up to 15 miles from the centre, and tropical-storm-force winds extend outward up to 90 miles (150 km).