Kicked from Queen's, scores at Hydel - 'Girl gangsters' ace CSEC after being handed a second chance 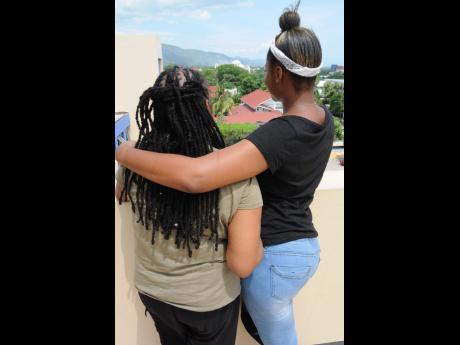 Lionel Rookwood
Trecia (right) and her proud mother recounting her second chance from alleged ‘girl gangster’ at The Queen’s School to CSEC star at Hydel.

At least four of the eight girls who were booted from The Queen's School two years ago have made good of their second chances by achieving a combined 22 Caribbean Secondary Education Certificate (CSEC) passes.

Once dubbed 'girl gangsters' for their alleged role in a fight that left two persons injured while they were students at Queen's, the four are all now making preparations to enter sixth form at Hydel.

In a May 2015 Sunday Gleaner article, it was reported that parents of at least eight Queen's School students were instructed to find new institutions for them immediately, following a probe into a battle which started on the school compound and continued on the road.

Founder of the Hydel Group of Schools, Hyacinth Bennett, noticed the article and reached out to the Ministry of Education offering to take the eight girls, but only four took up the opportunity.

The change of environment seems to have worked wonders for the girls, with 17-year-old Trecia*, the main beneficiary, having achieved seven CSEC passes this year, including being the school's top student in electronic document preparation management, one of Hydel's three compulsory subjects.

"It is a bit overwhelming, and up until this day, I am still in disbelief, as before my examinations I did not know what name studying," Trecia told our news team.

"So to see that I got those results and they are fair, it is really overwhelming. I know I could have done better but it is what I worked for that I got.

"Hydel has made me the person I am today. I have learnt to face the reality of life, and that when you get a second chance you make use of it because it is not every time you are going to get a second chance in life at certain things," added Trecia.

But even more than her academic achievement, Trecia is happy to have made her mother proud after all she put her through.

And having now seen what she is capable of, Trecia is motivated to make her mother even more proud by doing well in sixth form and go on to get a university degree in business.

"So all of my pain, my tears, my sleepless nights. Yes, yes, yes. It was all worth it," Trecia's mother told The Sunday Gleaner

"I am just over the moon with how I feel. Somehow I think this has shown her that there is life in her."

Hydel is Trecia's third secondary school, having first attended St Hilda's, which she had to leave due to a serious medical condition and insolent behaviour.

The medical condition, which at times caused her public embarrassment, and the insolent behaviour were carried over to Queen's, although she maintains that she was expelled unfairly as she was guilty only by association.

Trecia believes it is the strength of her mother, the intervention of Bennett and the support of her church family why she is still alive, having contemplated and attempted suicide and engaged in other acts of self-harm.

On one occasion, she used a razor to inflict 72 cuts to her hand after a judge barred her from travelling, pending the outcome of the probe into the Queen's fight incident, which was eventually settled through mediation.

According to Trecia, her father not playing an active role in her life is the main reason for her "outlaw" and "very disrespectful" behaviour, which persisted at Hydel, as she kept getting suspensions.

"The whole situation with Queen's and the change of school, it was kind of overwhelming, and to see that it was my mommy alone, although my daddy was there, him not doing anything, just there holding space," said Trecia.

"I tried reaching out to him, and every time I reached out it just went back to square one, so it was like a feeling of rejection."

Trecia's mother has suffered three minor heart attacks in the last two years, and the teenager, who is the youngest of her four children, blames herself for the first.

"Who don't know me doesn't know that my mother is my world. No matter what I put her through, in the end I can always depend on her," said Trecia, who still agonises about nearly losing the woman who is her rock.