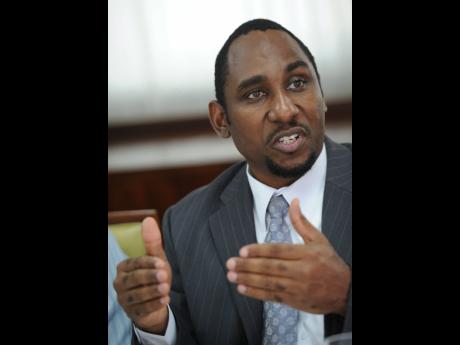 President of the Jamaica Civil Service Association, O'Neil Grant, has described as a "blatant lie" claims that he was given a copy of the regulations of the Pensions (Public Service) Act to share with his colleagues in the Jamaica Confederation of Trade Unions (JCTU).

Grant, who was among union leaders attending the sitting of the Senate on Friday, where two pension bills were being debated, appeared shocked when Leader of Government Business Kamina Johnson Smith said the regulations were given to him to share with members of the JCTU.

The Gleaner sought a comment from a peeved Grant, who complained that he had a private meeting with state minister for the public service, Rudyard Spencer, where a technocrat from the finance ministry gave him a copy of the regulations on condition that he did not divulge the contents to anyone.

However, Grant said he was shocked to hear the technocrat telling Johnson Smith during the sitting of the Senate on Friday that he (Grant) received the document while representing the JCTU, and therefore was expected to share the information with his union colleagues.

"I had a private meeting with the minister. He called the technocrat in the ministry and asked her to give me a copy. She told the minister that she was not willing to do so it, but he (Spencer) insisted and they ask me to treat it with the utmost of secrecy and I did. To hear it being mentioned to the senator that I got a copy and did not share it with the confederation is a blatant lie and I am going to write the minister and ask the member to apologise," Grant said.

He insisted that he would pen the letter last Friday, demanding an apology for the inaccurate statements made in the Senate.

"I am very upset that she has come to the Senate to advise the leader of government business that the matter was shared with the confederation through the Jamaica Civil Service Association," said Grant.

Johnson Smith told her colleague senators that the regulations were shared with the unions.

"We were advised that Mr Grant represented the joint confederation in receiving the regulations," Johnson Smith said.

At the same time, opposition senators urged the government side to again delay debate on the pension bill to allow talks between the unions and the minister of finance on certain issues which form part of the regulations to be concluded.

Johnson Smith acquiesced, but indicated that after the meeting with Audley Shaw next week, the Senate would close debate and pass the legislation.

Debate on the bill was first suspended on July 28 after Senator Floyd Morris complained that he did not get enough time to peruse amendments to the bill.