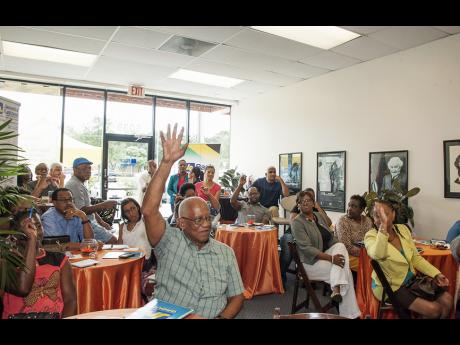 Contributed
Jamaicans living in Florida raise their hands during a presentation by JN Bank Chief of Marketing, Saniah Spencer, about opportunities for investment in Jamaica. The event was held at the JN Bank Representative Office in Tamarac, Florida. 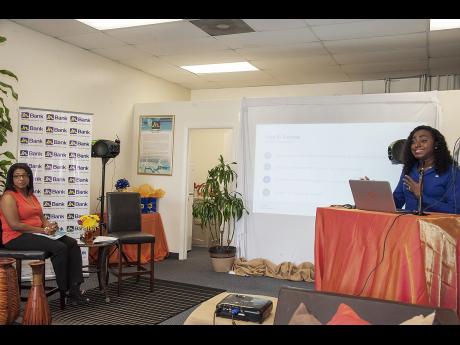 Contributed
Saniah Spencer (at podium), Chief of Marketing, JN Bank, speaks to Jamaican investors in Florida recently. The event was held at the JN Bank Representative Office in Tamarac, Florida.
1
2

Chief of Marketing at JN Bank, Saniah Spencer, has encouraged Jamaicans in the diaspora to capitalise on the improving Jamaican economy.

Speaking to 55 Jamaican investors living in Florida recently, Spencer indicated that the Jamaican economy is growing; and she outlined several areas that are ready for investment.

"Inflation has been reduced to approximately two per cent; debt has declined from 145 per cent of GDP, prior to the current economic reform programme, to 115 per cent at the end of March this year; and interest rates are falling," she disclosed, pointing to the entry of JN Bank in the market as one of the forces behind the reduced interest rates.

"Unemployment is also decreasing, as figures in the past year declined from 12.8 per cent to 12.2 per cent," Spencer outlined. "In addition, consumer and business confidence have risen tremendously and remains at an all-time 16-year high, as Jamaicans become upbeat about real prospects for investments and jobs."

Spencer said that logistics is among the emerging areas and opportunities are developing from the expansion activities at some of the country's major ports of entry, as well as continued initiatives to expand the country's road network. She noted also that there will be need for services to support the port activities, such as storage and warehousing as well as indirect activities.

"These positive developments have also opened up many opportunities for investment in real estate," she said, "as improved road infrastructure connect communities and parishes, and there will be increased real estate value outside of urban centres."

She referenced business process outsourcing as another growing market, noting that it currently accounts for the highest employment growth rate in the country, employing more than 22,000 Jamaicans.

However, beyond business, Spencer highlighted that there were instruments in which individual Jamaicans overseas can invest and earn.

She highlighted the performance of the Jamaica Stock Exchange (JSE) and encouraged Jamaicans overseas to look at the local stock market as an area for investment, pointing out its performance over the past two years. In 2015, the JSE was declared to be the best performing stock market in the world, with more than 85 per cent of its listed companies gaining value on the stock exchange.

Saniah Spencer, marketing chief at JN Bank updated Jamaicans in Florida about recent announcements that the Government is seeking to introduce a Diaspora Bond by the end of the financial year, which is intended to provide investors with a satisfying return while providing an opportunity for them to contribute to the development of the country.

In addition, Spencer said that JN Bank has issued a Diaspora Certificate of Deposit, which allows Jamaicans overseas to earn an attractive yield while contributing to the development of social enterprises that generate social and economic growth for communities and groups.

"JN Bank is positioned to facilitate these investments through our linkages and partnerships with developers and government agencies, and through our products and services," Spencer advised.

She said that the bank's savings and loans products included business loans to facilitate the investments of Jamaicans in the diaspora, as well as online facilities through its JN LIVE banking platform to manage payments and facilitate online transactions.The transactions facilitated include interbank transfers, wire transfers, foreign exchange purchases and bill payments.

"It is clear that although we have much to do to increase economic growth and spur development, the Jamaican economy is on the right path. It is strengthening and expanding, and is ready for investment in various areas," she affirmed.