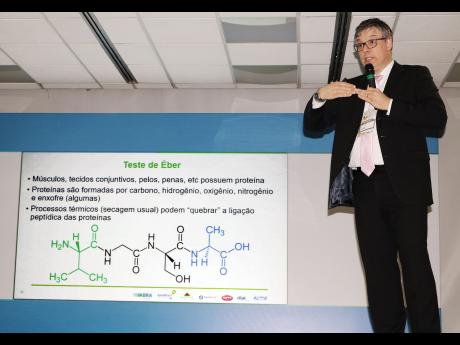 Christopher Serju
Lucas Cypriano head of the technical department at Brazilian Renderers emphasizes the science behind the process which makes the consumption by animals and use by humans of the by-products safe, during a recent presentation. 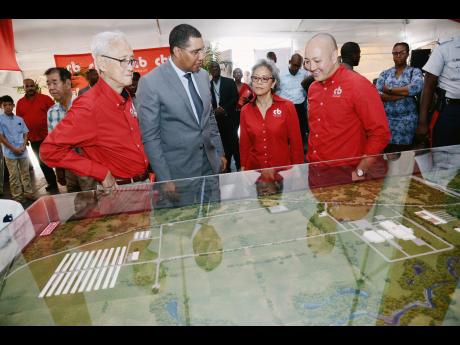 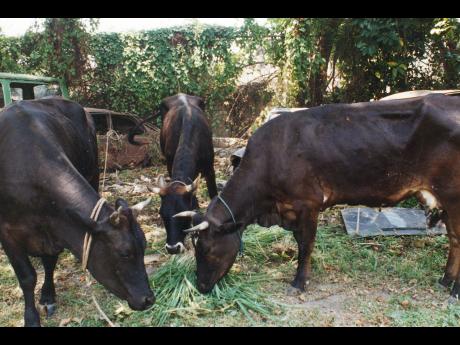 For more than 100 years Brazil has engaged in protein extraction from by-products or waste meat of animals slaughtered during the regular course of butchering.

This process, known as rendering, results in the conversion of the offal, heads and in the case of chickens, turkey, geese and ducks, even the feathers into value-added material which has been used to fund and sustain a multi-million dollar industry there.

Last Wednesday Lucas Cypriano, who heads the technical department at Brazilian Renderers, a company that renders in excess of 12 billion kilos of waste from cattle, goat, pigs, fish, chicken and turkey waste each year, dismissed concerns about the safety of value-added products from this for use and consumption by animals and humans as misinformed as much as it is uninformed.

"Forget perception, go to the science," he told The Gleaner. "There are several papers concerning the use of these by products. Several and all of them state that there is not a single problem, if done correctly.

So as long as you render properly with the proper rules, in the proper situation there is no risk. Rendering boils the raw material to 1008C for 40 minutes, then it rises to 1258C for the last 20 minutes. That should kill everything. The rendering system in Brazil is for more than 100 years and no one knows that we exist, why? Because we create no problems. If you create problem, then you are known everywhere (for the wrong reasons)."

Described as the most economical, as well as environmentally-friendly method of disposing of carcasses, rendering is a closed system for thermal treatment of animal tissues leading to stable, sterilised products such as animal fat and dried animal protein. It grinds the tissue and sterilises it by heat under pressure, in the process rendering all the pathogens inactive.

The oil is separated from the solid and used in the production if biofuel, soap, waxes, among other items, which the solid is used in a wide range of animal feeds.

One of the benefits of rendering is that it reduces the need for disposal of the animal waste in the traditional methods such as dumping, burning and burial, which are definitely not environmentally friendly and potentially could trigger animal and human health problems.

However, Mark Haskins, chief executive officer of the Caribbean Broilers Group, was very careful in explaining, during the recent launch, that the animal feed by-product derived from poultry blood, feathers and guts, at its state-of-the-art processing plant to be constructed at Hill Run, Catherine, would be exported to other companies for use in high-end energy pet foods.

This is even though the group produces a very successful line of animal feeds.

He made no reference to it, but it was clear that this clarification was deemed necessary to prevent any semblance of the public outcry when the plan was first mooted some six years ago.

Plans were well on track for the use of the rich-in-protein ingredients to be incorporated in its manufacture of poultry feed until a number of pronouncements on the issue by Christopher Levy, chief executive officer of rival poultry company, Jamaica Broilers, effectively derailed this investment.

"We do not feed chicken to chicken," Levy said, declaring this was consistent with the company's high phytosanitary standards.

The potential risk of salmonella poisoning, public perception about safety of the further processed material being integrated into the poultry industry chicken and a claim that the export market would not be amenable to such products were the primary reasons cited by Levy.

Following public outcry, Caribbean Broilers shelved plans for its rendering plant, and even when it served notice about plans to engage in this cost-saving and measure, it was careful to announce the by-products would be destined only for the export market.

However, for Lucas Cypriano, whose company was among the many organisations showcasing their globally competitive goods and services at the 2017 Poultry and Pork Show in Sao Paulo, Brazil, rendering is a critical component of a successful business.