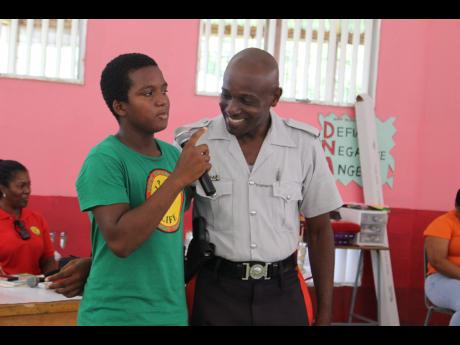 Contributed
Sub-officer in charge of Community Safety and Security in Trelawny, Sergeant Wayne Wallace, enjoys a light moment with a participant in the Identity, Purpose, Attitude and Destiny summer camp at the Spot Valley High School in St James recently.

Police Sergeant Wayne Wallace is an officer on the front line in western Jamaica, working to build relations between the security force and residents.

The affable cop, who is sub-officer in charge of Community Safety and Security in Trelawny, said that his job is not easy.

However, having grown up in modest circumstances, and faced some of the same challenges as the residents he serves, he is able to use those experiences to connect with the citizens, particularly the youth.

His near-16-year struggle to realise his dream of joining the ranks of the Jamaica Constabulary Force (JCF) is a story he shares regularly while interacting with youths, hoping it will inspire them to achieve.

"At the age of 14, I started writing my name as Constable Wayne Wallace. I was working on my dream, and I was not allowing anybody to take that dream out of my head," the police sergeant shares with a group of more than 70 teenagers at a recent police youth camp in St James.

Even after graduating high school in 1989 and failing to pass a single Caribbean Secondary Education Certificate (CSEC) subject, Sergeant Wallace did not give up on his dream.

"I stayed there (at the hotel), made a little money and went to evening class. While working, I paid a man to teach me maths," he shares.

It took him four attempts before he was successful at passing the police entrance examination. This was after sitting the CSEC exams a second time and passing three subjects, the minimum requirement for entry in the JCF at the time.

He was drafted for police training in 2004.

"When I entered the JCF, I entered with a vision. When I graduated (in 2005) I said to myself 'I want to go to whatever (police) division they send me and make a difference as a probationary police'. When I went and did my probationary exam I got an award for being the most outstanding officer," he says, beaming with pride.

Three years later, he was promoted to the rank of corporal and designated sub-officer in charge of Community Safety and Security.

... 'What matters is how you live your life'

Sergeant Wayne Wallace's second promotion came in 2015 when he was elevated to the rank of sergeant.

Sergeant Wallace describes the Jamaica Constabulary Force as a brand that he is proud to represent, and one he believes all law-enforcement officers should guard zealously.

"My duty is to protect the brand and let you want to buy my brand. If I meet you on the street and talk to you and leave you with a smile, then I know I have accomplished something," Sergeant Wallace says.

The corporate strategy of the Jamaica Constabulary Force mandates the use of community policing in the fight against crime.

This is done through the Community Safety and Security Branch (CSSB) implemented in all police divisions islandwide.