Uncertainty for some Jamaicans in US as Trump ends DACA programme 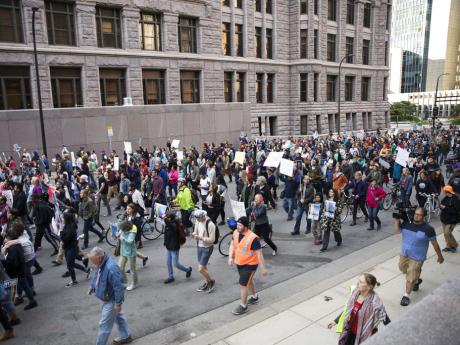 A large crowd marches during a protest against the announcement that the Trump administration is ending the Deferred Action for Childhood Arrivals program, known as DACA, in Minneapolis. – AP

Uncertainty surrounds thousands of Jamaicans living in the United States who are beneficiaries of the Obama-era Deferred Action for Childhood Arrivals (DACA) programme.

On Monday, US Attorney General Jeff Sessions announced that the Donald Trump administration would rescind DACA by March 2018 and said Congress would be given six months to find a legislative alternative.

Introduced in 2012, the programme gives temporary legal immigration status to people who arrived in the US illegally as children.

Current statistics by the US Citizenship and Immigration Service show that since 2012 and up to March 31 this year, a total of 7,810 Jamaicans were approved for DACA.

A total of 6,773 Jamaicans had their permits approved over the period.

She says the decision of the Trump administration has served to reinforce the fears of illegal immigrants.

Walker Huntington says it is being hoped that the US Congress will come up with a legislation that will see DACA recipients remaining in the country.