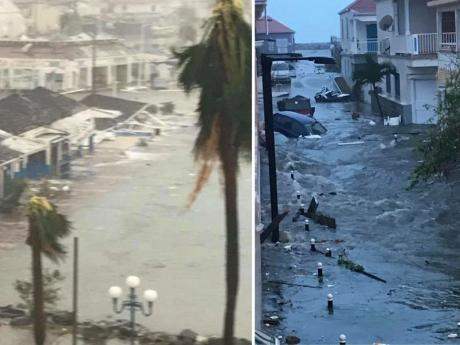 Flooding in St Martin in the aftermath of Hurricane Irma. – Contributed Photos

Hurricane Irma is moving towards the Virgin islands after pounding the British Overseas Territory Anguilla and St Martin as it makes its way through the Lesser Antilles.

The authorities in St Barthélemy and St Martin say several buildings have been destroyed and there’s a total electricity blackout.

They say in St Martin, government offices have been damaged and the island’s French Prefect and 23 staff are taking shelter in a concrete-lined room.

It says Irma is moving toward the west-northwest near 16 miles per hour and this general motion is expected to continue for the next couple of days.

It says maximum sustained winds are near 185 miles per hour with higher gusts.

In St Kitts-Nevis, the authorities said that the storm passed to the north of the Federation and while residents are still experiencing wind and rains, initial reports appear to indicate that the Federation has escaped the worst.