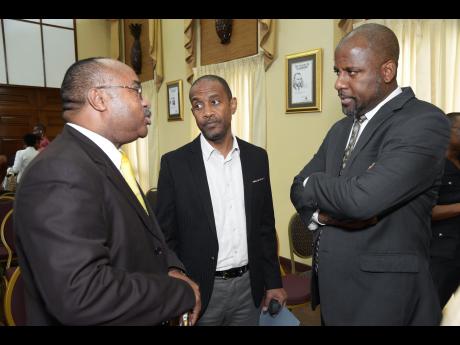 Ian Allen
From left: Major Clive Davis, director general of the Office of Disaster Preparedness and Emergency Management, Evan Thompson, director of the Meteorological Service of Jamaica, and Dr Wayne Henry, director general of the Planning Institute of Jamaica, talks about disaster prepardness during the media launch of Disaster Preparedness Month and observance of the Atlantic Hurricane Season 2017. The launch was held at the banquet Hall, Jamaica House, on June 1.

FROM THE dangers of a changing climate to the pressing need for advanced and adequately financed preparation, Hurricane Irma and before that, Hurricane Harvey, are chock-full of lessons for Jamaica.

"Irma is unusual in that it developed so quickly and reached such a significant strength before getting to the Eastern Caribbean chain. That is likely to become more frequent under the climate change scenario so the preparation time will be much shorter. It is more important and necessary, therefore, to prepare ahead of the hurricane season," Evan Thompson, director of the Meteorological Service, told The Gleaner.

"Right behind Irma is another system, so the energy in the atmosphere is such that you can have back-to-back hurricanes, and that is also likely to become a more frequent occurrence," he added.

Powered by sustained winds reaching 300 kilometres per hour, Irma, up to yesterday, had affected Saint Martin, Saint BarthÈlemy, and Antigua and Barbuda. This, while putting others, including Puerto Rico, the Dominican Republic and Florida's Key West area, on notice as to what could lay in store.

Harvey, forming as a tropical storm east of the Lesser Antilles on August 17, used heavy rain and gusty winds to assault those islands, before developing into a Category four hurricane and making its way to the Texas Gulf Coast where it caused billions in damage, including calamitous flooding.

Retired meteorologist and seasoned climate change negotiator for Jamaica, Clifford Mahlung, was in agreement with Thompson on both the behaviour of the systems and what it means for preparedness.

"What we are seeing is that even where you have the resources and the legislation and policy in place, these systems are now so powerful that they become overwhelming. A developed country will take years to recover from this. Imagine what poorer countries like Jamaica would go through if we, God forbid, were impacted by one of these Category five systems," he said, adding that mobilising financial resources was now more important than ever.

Thompson was of a similar mind.

"The more islands are impacted, the less assistance we can get from each other, and we see where Irma is threatening to disrupt many of the islands ... Other countries, too, are impacted so we are also likely to receive less donor support," he noted.

"We need to ensure we have our own supply of funds, whether we are dealing with the CCRIF (Caribbean Catastrophe Risk Insurance Facility) or another pool of funds we will have to develop just so we don't have to rely on donors," Thompson added.