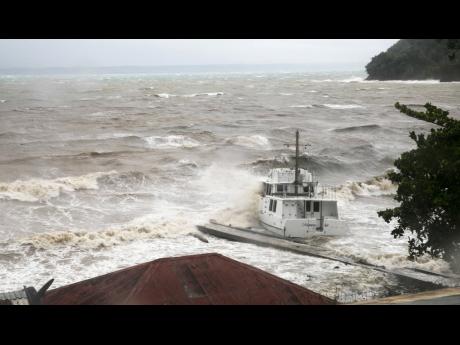 Waves crash against a boat near the shore as Hurricane Irma passes over Samana, Dominican Republic, on Thursday. - AP Photo

Hurricane Irma is flooding parts of the Dominican Republic as it roars by just off the northern coast of the island it shares with Haiti.

Officials say about 500 tourists in the Bavaro-Punta Cana area have been moved to more secure shelters just ahead of the Category 5 storm.

Civil Defense Director Rafael Carrasco says a landslide in the Samana Peninsula affected eight houses and more than 2,500 people have been evacuated.

Haiti's northern coast will be next, but Irma's stronger winds have yet to reach that side of the island of Hispaniola.

In Puerto Rico, more than one million people are now without power.

Puerto Rican Governor Ricardo Rossello says crews are now investigating and until they know the extent of the damage, it will be difficult to estimate how long the power outage will last.

In The Bahamas airports are to be closed.

The government says the international airport in Nassau will close later today and is urging people who plan to leave the island chain to check with airlines for space.

Grand Bahama's airport and those on the less-populated islands throughout the chain will close by noon tomorrow.