We work hard! - Yallahs High young leaders say pupils can get good results if they put their minds to it 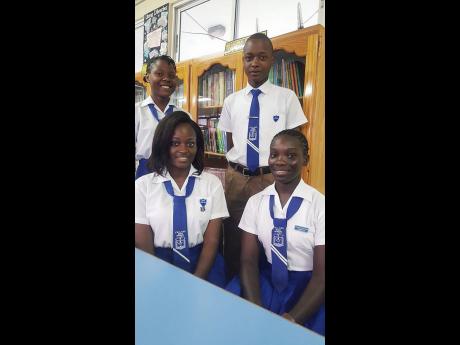 Having endured the much-anticipated stresses associated with exam periods coupled with the pressure of the expectancy of loved ones and proving the doubters wrong, top students of the Yallahs High School in St Thomas are now breathing a collective sigh of relief.

Past Head Girl Dacia Dixon and her deputy, Akiliah Wilson, alongside their male counterparts Gevanio Tucker and Dan-A Davis, who was a prefect at the school, admitted that initially being placed at what is considered one of the least performing schools in the parish had them disappointed and embarrassed.

However, those dark sentiments quickly rolled away as bright beams of optimism became the order of the day.

"I wanted to be placed first in all my class, to be on the honour roll, to stand out... I just wanted to be the best I could be, and thanks to God, that all happened," Dacia said, as her past classmates turned friends agreed.

The students told Rural Xpress that they felt they had something to prove because of the stigma attached to the institution.

According to the past head girl: "People in and around the community, including a few of the teachers, look down on the school, and because of that, I wanted to show them that my school is a top-of-the-top school despite what they think."

Dacia noted that though Yallahs High School is referred to as 'Dung a Yawd' by community members, it has produced many people who have and are still doing well.

Gevanio, the only male of the group, had some wise words to share.

"At times you have to tell yourself that it's who you are that defines you and not where you go because in life, you have to want something bad in order to get it. You can't always listen to what people have to say," he said, adding that there will always be critics.

Chiming in, Dan-A admitted that she received a lot of bashing when she began attending Yallahs High School.

From doubts to congratulations

But now boasting eight subjects, five of which are grade ones, the past prefect told Rural Xpress that the same people who doubted and mouthed her at the beginning are the ones congratulating her.

"You can do great wherever you are because there are dedicated teachers that will stand behind you 200 per cent and make sure you get something out of life. So just work with teachers and you will do better than I did," she said.

The scholars, who have all now gone on to greater things, wanted the new students of their now alma mater to know that they understand completely how they may be feeling right now.

Akiliah, who admitted to have endured a bit more than her peers due to problems at home, pleaded with the newcomers.

"If you want good, yuh nose have to run. Keep your mind on what you want in the future and what you need to take you there. Never stop trying, and ensure that at the end of the day, whatever you have is enough to get you where you want to be," she said.

The other students also encouraged the newcomers to work hard, set goals, and never stop fighting until they have accomplished and made themselves and those around them proud.