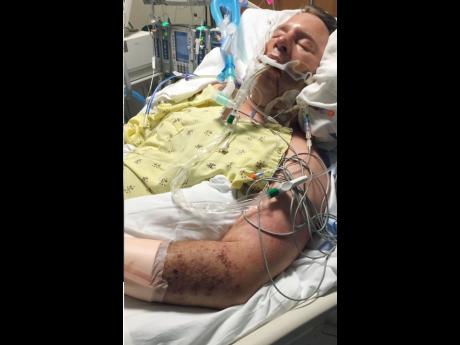 Contributed
Jonathan was in a coma for 71 days.

Jonathan narrated this story. His father-in-law, Tom Gunkel, is a generous benefactor. It is a story of great courage, will, and truth.

Jonathan had been trained at Dale State College Pennsylvania to be a TV producer. He was a healthy, strong, all-American young man who wrestled as a sport and won many trophies. After college, he worked as a TV producer then moved out to Los Angeles at the age of 25 years. He developed a TV company and was upwardly mobile. Then he moved to Washington, looking for even greater opportunities.

Then one day at a TV producer's conference, he got sick. At the conference, he began to lose his vision, and he was rushed to the hospital. Then he began to experience cold and flu-like symptoms - without any seeming external cause. At the George Washington Hospital, a medical team began to take special interest in him. There must be something strange going on. This was not just ordinary cold and flu and a dimming of the eyes. The medical team conducted intensive and complicated tests and finally concluded that Jonathan had HLH, or haemophagocytic lymphohistiocytosis.

Jonathan lapsed into a deep coma that was to last for 71days. Externally, he seemed to be very peaceful, but internally, he felt trapped and had awareness of some frightening realities. They were not just images. He felt they that they were real, and that terrified him.

There were creatures that appeared to him with sharpened teeth. These sharpened teeth were embedded in giant faces. They approached him as if to devour him, but Jonathan could not escape. He experienced terror, fever, imprisonment, but could not get out of the trap in his head. He cried and yelled, but there were no external sounds. All this time, Tom, his father-in-law, who loves him dearly, was in the hospital. Tom hardly ever moved out of the hospital for those 71 days.

Aside from this, there was the alternating experience of snakes in a box that kept climbing out and striking him. Nothing could be more frightening. Externally, Jonathan was breathing heavily for days, his internal fear, or interior psyche was manifesting itself with such breathing for days. "You are not the first, nor will you the last victim. Your end is near," was a voice heard as the snakes attacked.

Throughout those 71 days, Jonathan felt totally lonely and isolated. There were no people there, just a large open space that seemed like a vacuum. "Do you want to keep living, or do you want to die? If you want to live, it will be the hardest days of your life." What was this voice? Jonathan wanted to live. Oh! He wanted so much to live, no matter how much effort, even if there is so much pain.

Once he made this decision, Jonathan felt as if he was at the bottom of the ocean and was then transported to the top. He woke up 71 days after he lapsed into unconsciousness. His eyes were dizzy, but could see his loved ones, all smiling, crying, and greeting him with great joy.

Jonathan stayed in the hospital for another 19 days. This disease, HLH or haemophagocytic lymphohistiocytosis is most rare. He lost five fingers on his right hand. He also lost his entire left hand. Jonathan also lost his right foot and left toes. Gangrene had set into his joints and could have rot off all these members if they were not removed.

What had Jonathan gone through, was it purgatory or hell? Was it the voice of God that spoke to him asking him if he wanted to die? One thing was clear to him, there was a battle that took place within him, of heart, mind, and soul.

Jonathan has exercised day after day. He forces his mind to think positive thoughts.

"If I force myself to keep trying, to choose the right people, to keep doing the right things, all will be well. I must battle forward. I will not think what others think. Look at him! No feet, no fingers, no right hand. I always want to do things better. Now I can do TV a little - I'll keep on fighting."

My question is, do we have any choice? There is only one direction for us to go. In the meanwhile, let's get rid of our demons. There is so much that is beautiful ahead of us, unworthy as we are!