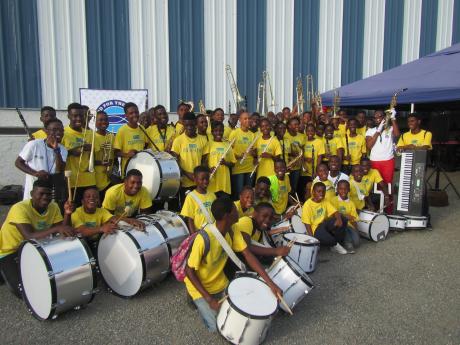 Contributed
Students of the Food For The Poor Summer Band Camp react after hearing the news that the instruments they used during the camp now belonged to them as a gift for their participation and dedication. 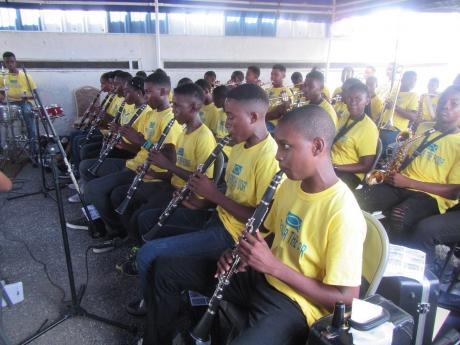 Contributed
Students who participated in Food For The Poor Jamaica’s annual Summer Band Camp perform during their graduation ceremony on Wednesday, August 16 at the charity organisation’s head office in Ellerslie Pen, St Catherine.
1
2

Food for the Poor (FFP) Jamaica's Summer Band Camp has trained 56 young people to play a variety of musical instruments, including the drum, saxophone, flute, trumpet, clarinet and trombone. At the camp's graduation ceremony, participants were gifted with the instruments they had learnt to play.

The three-week Summer Band Camp, which started in July and ended on August 16, took place daily on the grounds of the charity organisation's head office in Ellerslie Pen, St Catherine.

Now in its 13th year, the annual Summer Band Camp hosts students between 12 and 16 years of age. The initiative was spearheaded by the Prison Ministry Department, which includes Jeffrey Brown, band camp instructor, who gave one-on-one training to the students.

"It is a pleasure to educate the minds of young Jamaicans and teach them a skill in the field of music, which they can capitalise on and start their careers," Brown said.

He added that he encouraged the students to continue practicing with the instruments they were given and also play at their churches and in their school bands so as to enhance their talents.

David Mair, executive director, FFP Jamaica, in his remarks at the graduation ceremony, gave the students a motivational talk. Mair challenged them to continue practicing what they were taught while building on their proficiencies.

"Learning to play an instrument isn't easy. These students will be leaving with unlimited musical possibilities. They've learned not only how to make music on their instruments, but also how to read music. They've learned how to play together as a musical group, proper band etiquette and discipline and, most of all, how to practise and persevere," Mair said.

Also present at the graduation ceremony was Jamaican saxophonist Dean Fraser, who encouraged the students and thanked Food For The Poor for the impact being made in the lives of youngsters from volatile communities through music.

On Saturdays, each month after the graduation ceremony, a subsection of the band camp with approximately 30 students will receive traditional training at Food For The Poor's office to further enhance their skills.