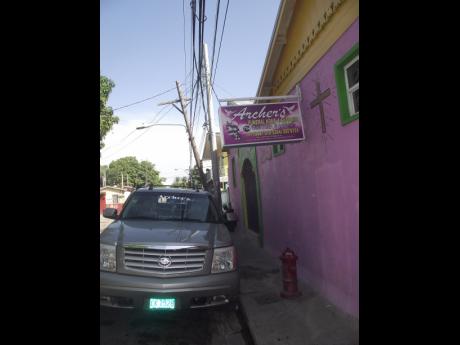 Having grown up watching his father using home-fashioned methods to preserve bodies, Michael Archer knew she always wanted to get into the operation of a funeral home.

But Jamaica has long passed his father's days of carrying the bodies on donkeys, and his business will now operate with a member of the first cadre of persons to be trained in mortuary science in Jamaica, his wife Janet.

"I remembered my father using his donkey to carry bodies home. When he did he would use Vaseline (petroleum jelly) to put all over the body. He also used pimento, coffee, nutmeg and other spices, beating them in a mortar and mixing them with vinegar, then the ice and sawdust was applied to the body to cool it for days," said Michael.

He noted that the system of caring for bodies has changed over the years, forcing operators of funeral homes into changes.

"Those time donkeys could move the dead, now the customers want high-end vehicles such as Escalades, Benz, BMW and other luxury vehicles to perform the final rites for their loved ones," added Michael.

For Janet, her training will now allow the family to move the business to an even higher standard.

"I am very pleased to have completed the two-year associate degree in Mortuary Science and Funeral Service at the Montego Bay Community College in St James," said Janet, as she pointed out that the course was offered in collaboration with Humber College of Canada.

"I think it has increased my knowledge of the business, and this can only strengthen the services that we offer. My husband's practical experience combined with the formal learning will benefit tremendously, and I hope others will get trained and certified," added Janet.

Minister of Health Dr Christopher Tufton has indicated that there will be more regulations in the form of legislation to monitor the operations of funeral establishments and mortuaries.

Tufton has argued that it is important that the bar be raised in the industry in terms of licensing of personnel and institutions, accountability and adhering to international best practices.

"With well over 200 funeral homes in the country, the areas of industry standards, accountability, public health standards and conformity within an international context will have shortfalls without proper regulatory measures," noted Tufton, as he warned that the self-regulation which takes place now will not be allowed to continue.