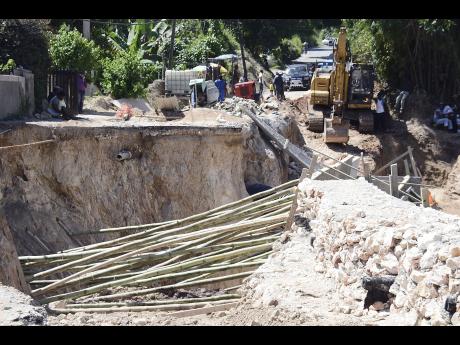 The National Works Agency (NWA) is appealing for commuters to exercise patience as it continues road repairs to create single-lane access at Mount Ogle, along the main road from Nolan Hill to Border, St Andrew, in the shortest possible time.

The NWA had last week announced that it was working to have single-lane vehicular access by yesterday.

Stephen Shaw, manager, communication and customer service at the NWA, however, said that inclement weather throughout the course of the week hampered work on the construction of a main retaining wall at the location.

Shaw said that the pouring of concrete had to be aborted as a result of heavy rainfall last week. He explained that once poured, the concrete must be allowed a minimum of seven days to cure in order to acquire the requisite strength. This, he said, will delay the reopening of the roadway.

While vehicular access has been pushed back, pedestrians can now use a section of the road that has been sufficiently backfilled. Pedestrians have for the past week been accessing either side of the breakaway through private property. This arrangement that was brokered by the NWA saw pedestrians being allowed through two private properties, between the hours of 6 a.m. and 6 p.m. daily.

The pouring of concrete for the main wall was expected to be completed on Monday with an aim to establish single-lane vehicular access by Monday, September 18.

Mount Ogle became impassable from a massive breakaway following the heavy rains in May. The NWA commenced emergency works to restore the roadway in July under a $26-million contract.