Leon Haley sails through his storm 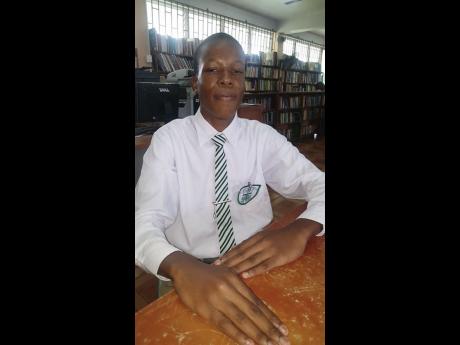 Having gone through a little more hardship than most of his peers, 17-year-old Leon Haley today stands as a testament of perseverance and stick-to-itiveness.

Though consumed with the worry of whether the next day will mark another absent on his class register, the Morant Bay High School student rode out his storm and is now sailing, though not yet smoothly, above his financial strains with 10 CSEC passes, half of which are grade ones.

Leon recalled the moment he saw his results:

"I nearly fainted when I got the grades, especially when I saw that I got a one in maths. I went and told everybody and I was just smiling all day. It really lifted my spirit," he said, as he explained that he was nervous after the exams and a bit doubtful about his performance.

Of the hardships he faced throughout his academic life, Leon told The Gleaner that he was always struck by financial problems.

"Most times I could not go to school because my parents couldn't find bus fare or sometimes lunch money. I've even gone without textbooks when the rental books got destroyed by water from the leaking roof of my house," he said.

Leon, who lives with his mother and younger brother, said that though funds were low, he had never had to worry about where his next meal would come from as his mom would find and prepare whatever she could to ensure that they were fed.

According to him: "My only worry was what I was missing at school on the days I was absent and sometimes friends were unreliable. However, there were teachers and some friends who helped me out when they had the time."

The Seaforth resident explained that his situation didn't weigh him down but instead motivated him.

"Most people in my community pushed me to work hard. They are always encouraging me to become the best I can be. When I look around my community and see what struggle does to young people like me, I realise that I really need to work hard because we need an improvement," Leon said, adding that he also wishes to help himself and his family find a better life and to one day take his mother to see the world.

Having struggled during the summer to make ends meet, Leon, who said he registered for sixth form at the last minute after various people pooled to help him find his school fee, told The Gleaner of his big dreams.

"I want to become a mechanical engineer who specialises in material sciences so I can find out what materials are best for what constructions."

The young man, who admitted that neither he nor his mother owns a cell phone, said he also hopes to venture into community science and try to create one of the world's fastest computers.