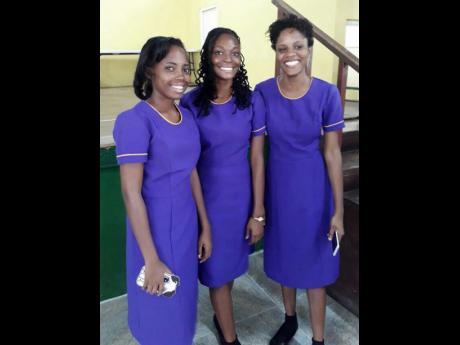 Riding on the back of some good Caribbean Secondary Education Certificate (CSEC) results, St Hilda's Diocesan High School began its sixth-form programme on Tuesday with a batch of 36 bright and energetic students.

All the students admitted in sixth form, except two, recently completed fifth form and did well in their CSEC examinations at the 111-year-old all-girls institution.

The establishment of the Brown's Town Community College in 1975 rendered sixth forms unnecessary for schools in St Ann and the region; however, in recent years several schools have reverted to offering the classes at that level.

According to principal Heather Reid-Johnson, sixth form at St Hilda's will allow parents a bit more control over their children.

The curriculum at St Hilda's sixth form consists of more than 15 subjects, including the traditional ones such as physics, chemistry, biology, mathematics, English language and literature, Spanish, accounting and law, but also those addressing modern-day trends such as entrepreneurship, digital media, art and design, and tourism, among others.

Input from the students guided the design decision of the curriculum, according to Reid-Johnson.

"The students actually indicated the subjects they wanted to do, so based on that we were able to decide what to offer," Reid-Johnson explained.

The start of the sixth form programme comes after another year of good results for the girls in the CSEC examinations, a tradition long associated with St Hilda's.

"The passes were very good overall," the principal revealed. "We had 10 subjects where we got a 100 per cent pass rate, for English we got 98 per cent pass, mathematics 86."

With students being limited to sitting eight subjects, there were three students who got eight grade ones while even more got seven grade ones.

With the addition of the sixth form, Reid-Johnson is confident that the high academic performance associated with the school over the years will continue and embrace the grade.

"We have an excellent staff and they will ensure that our girls continue to do their best," Reid-Johnson asserted.