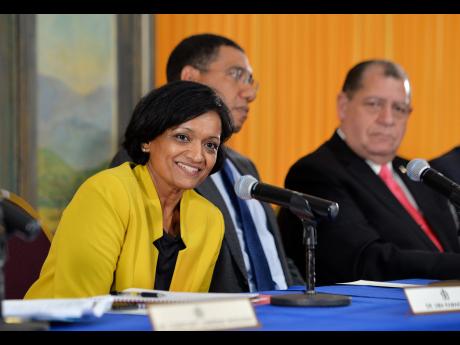 Prime Minister Andrew Holness (centre), and Finance and the Public Service Minister Audley Shaw (right), listen as Head of the International Monetary Fund (IMF) Mission Team to Jamaica, Dr. Uma Ramakrishnan, outlines details of the second review conducted under the IMF's three-year Precautionary Stand-by Arrangement. She was speaking during the joint Government of Jamaica/IMF press conference at the Office of the Prime Minister on Thursday.

Jamaica is virtually assured of an additional US$180 million from the International Monetary Fund (IMF), if needed, by meeting all quantitative targets and structural benchmarks in the second review.

The review was conducted under its precautionary stand-by arrangement (PSBA) with the multilateral institution for the period up to June 30, 2017.

Head of the IMF's mission to Jamaica, which conducted the review over the last two weeks, Dr Uma Ramakrishnan, says the provision, subject to the IMF executive board's approval at its meeting scheduled for October, will bring the total amount of funds that Jamaica can access to approximately US$790 million.

She was speaking at a joint Government of Jamaica-IMF press conference at the Office of the Prime Minister on Thursday, where details of the review were outlined.

Additionally, she said the central Government's primary balance surplus has exceeded the programmed target by a "healthy margin", due mainly to buoyant corporate income tax.

The mission chief further said that non-borrowed reserves have been overperforming, adding that inflation is anchored in the Bank of Jamaica's inflation target range of four to six per cent.

Ramakrishnan said despite the impact of adverse weather conditions experienced earlier this year, the economy continues to rebound.

She highlighted strong performances recorded in tourism, construction, and manufacturing, as also further reduction in the unemployment rate to a seven-year low 12.2 per cent, coupled with a sustained expansion in the labour force, as positive out-turns in this regard.

Ramakrishnan reiterated that growth for the 2017-18 fiscal year is projected to be approxi-mately 1.6 per cent. This, she noted, is slightly lower than the forecast that was given when the initial review was conducted earlier this year, and was due primarily to the impact of the adverse weather conditions.

The just-concluded review comes one month shy of a year since the three-year PSBA came into effect, replacing the extended fund facility, which spanned four years.