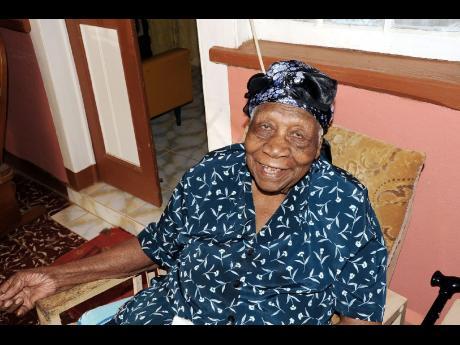 Her son, Barry Russell, 85, said the death came as a surprise, even though she was hospitalised.

Russell said that he gave instructions for his mother to be taken from her Duanvale, Trelawny, home on Saturday after she got ill.

According to Russell, when he spoke with his mother yesterday morning she asked when he was coming, and he told her: "Hold on, I am coming Monday."

"Even the doctors can't believe it because they were supposed to release her today," he said. He said that during the conversation, his mother had said her heart was willing but her body was weak.

Russell said that she didn't look well on Saturday and was taken to a doctor who said she had irregular heartbeat and was dehydrated.

She said that her grandmother was an amazing woman who always made her laugh, and that was the case when she saw her a few months ago.

"I was wearing a shorts and she said: Why unno nuh cover up unno skin nowadays," Davis Fray said.

The last few days of Brown's life had been eventful. She had been caught in the middle of a tug of war between members of her family as one group that claimed that she was not getting the best of care had snatched her from her Duanvale, Trelawny, home and refused to say where she was.

Russell said that she was at the Fairview Medical Centre and argued that she may have died on the weekend had he not ordered her removal from the house.

"I feel bad but I know she is old and she can't take a lot of things. It is sad but I expected something like this any time," said Russell, who saw his mother a month ago.

With the death of his mother, Russell is now forced to plan a second funeral in five months. His brother, 97-year-old Harland Fairweather, who was listed in the Guinness Book of Records as the world's oldest man with a living parent, died peacefully at his home in Duanvale, in April.

"It is very difficult," said Russell, adding that one of his sisters is at this moment very ill and he is afraid to share the news of her mother's death with her.