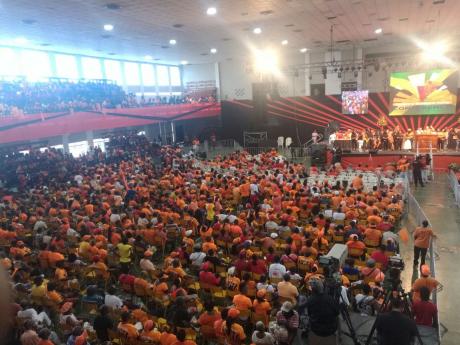 A section of the audience at the National Arena

When Damion Crawford, the firebrand young comrade approached the lectern at the People's National Party (PNP's) 79th annual conference, he asked the packed National Arena in Kingston to withhold cheers and musical interjections so that he could have uninterrupted reasoning with the supporters.

Crawford wanted to tell them they had a part to play in ensuring "real equality" in Jamaica.

The former state minister in the Ministry of Tourism and Entertainment said, not even in the church was there equality as pastors were more interested in the size of the offerings of the rich.

He also said majority of the persons attending the conference did not have health insurance nor were they graduates of the top-performing high schools.

But according to Crawford, Jamaica needs to ensure that elected representatives institute policies that would benefit the masses as was evidenced by PNP leaders over the years.

He said the PNP has made significant policy changes to impact the lives of the masses.

As a result, Crawford said Jamaicans should know that the most significant power they hold was in their fingertips.

He challenged them to vote for the party with a track record of policy changes that impacted the lives of the majority of Jamaicans.