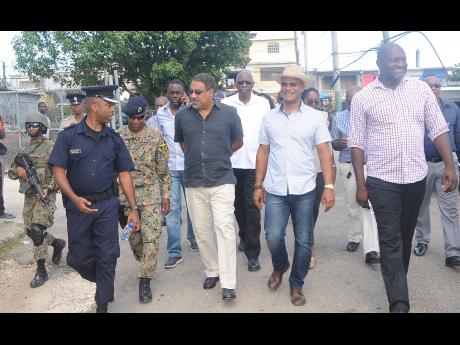 People's National Party (PNP) supporters in Mt Salem, St James, added a political spin on the zones of special operation (ZOSOs), telling Peter Bunting, the opposition spokesman on national security, that they believe politics was at the heart of the decision to launch the first zone in their community.

"You have JLP (Jamaica Labour Party) communities with alarming murder figures, where people are even firing shots at the police, so why they didn't target one of those communities?" asked Grace Brown, declaring that the ZOSO had badly stigmatised Mt Salem, as the impression was given that the community is being overwhelmed by violence.

"They choose Mt Salem because we are a PNP community ... we never deserve this ZOSO ... it should be in Dr Chang's (Horace Chang) constituency, where the murders are far greater. We don't have a problem with the police and the soldiers, what we have a problem with is the politics behind the decision," added Brown.

While making it clear that, for the most part, the soldiers and police were quite respectful of their rights as law-abiding citizens, some residents of Mt Salem have expressed frustration about being searched, asked to produce identification, and being sent to bed at nightfall in the first community named a zone of special operations (ZOSO).

While not playing up on the political sentiments expressed by residents, Bunting, who was accompanied on the tour of Mt Salem by PNP vice-presidents Dr Fenton Ferguson, Dr Angella Brown Burke and Dr Wykeham McNeill and other local party officials, said he fully understood the concerns expressed.

"From an escalating violence and murder point of view, they feel that they have been improperly tainted and they were all quite clear on that," said Bunting. "They were all very certain that, from the original numbers that were announced, that that was vastly inaccurate ... it is unfair to them and I completely understand their views."

He added: "As a parish or a police division, St James has a murder rate of 156 per 100,000 and that is the average of St James. If you were to look at the worst spots, you would be well over 200 or 300 murders per 100,000. The citizens are of the impression that there were some amount of political considerations that went into the selection, because they don't feel the statistics bear them out on this selection."

However, Bunting nonetheless pointed out that the ZOSO could bring some much-needed benefits to Mt Salem, especially in regard to some long-awaited social intervention.

"We see it as an opportunity to get a transformation of the physical infrastructure in the community ... we are hopeful that regardless of whatever consideration may have gone into the selection or whatever errors were made upfront, moving forward, they will work with the security force, because they are anxious to see the much-promised social intervention come to fruition.

With regard to the views of some residents that the ZOSO should be expanded into neighbouring communities, some with a far more violent reputation than Mt Salem, Bunting said he would not have any difficulty with that, once whatever was being done falls within the law.

"Within the law, it prescribed what conditions should be in place before you consider this as an eligible zone; our insistence is that the law must be followed. So, as long as the law is being observed; and part of that is that it must not be a political selection."