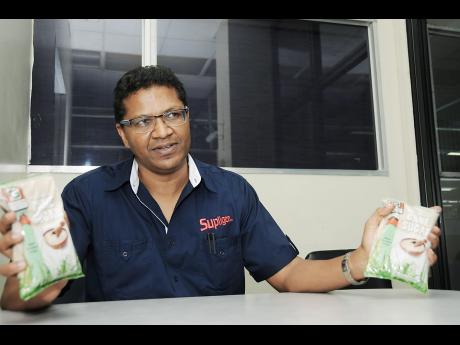 Jermaine Barnaby
In this April 2016 file photo, Seprod CEO Richard Pandohie shows off one of the latest products from his company, packaged brown sugar.

Richard Pandohie, the chief executive officer of the Seprod Group, has said it is important for the Government to resist the temptation to relax the new packaging and labelling standards for sugar, and believes the new packaging regime should be extended to other basic commodities such as flour.

Speaking against the background of pressure being applied by interest groups to relax the recently introduced packaging and labelling standards, Pandohie cited food security as one factor in his call not to bow to the pressure.

"It is interesting to watch the reaction to the new packaging and labelling standards," Pandohie said during a recent interview with The Gleaner. "The labelling and the packaging standards that are in place need to stay in place.

"There are clearly teething pains, but this is about food security, and this needs to remain in place ... we need to hold the course on this and even expand it to include items such as flour," noted Pandohie. "I understand the demand for the one-pound package, it's an affordability issue. We, like others, are now moving to respond to this and we should be operational by October."

The new standards for packaging and labelling brown sugar being sold in the retail trade became mandatory on July 1.

However, the scarcity of smaller packaging has irked some consumers and merchants, who are calling for a revocation of the new standards.

"What is happening in Jamaica is not a shortage of sugar, but the most popular format is what is called the one-pound sugar, and the reality is that there is not enough packaging capacity to match the demand," stated Pandohie. "In hindsight, we look at that, but the industry should have been more prepared. "

The new standards were expected to address public health concerns and improve traceability, and were designed to also include required information such as net content, details of the manufacturer, distributor, importer and vendor, among other things.

The new regime, which was gazetted and published at the end of 2016, is in keeping with the national strategy to guarantee the integrity of the product and protect it from contamination, as well as serve as a deterrent for those who import the sweetener for use as raw material but sells it on the local market.