Visitor arrivals to Jamaica expected to double this year 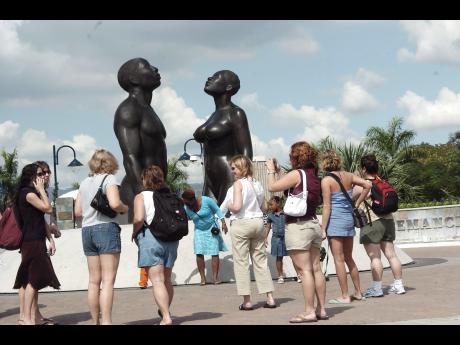 File
In this file photo a group of tourists are seen taking pictures of the popular ‘Redemption Song’ statue by artist Laura Facey Cooper, which stands outside Emancipation Park in New Kingston.

Jamaica is set for a double digit increase in visitor arrivals for 2017, after surpassing the ministry's projection of five per cent after just eight months.

"I am pleased to tell you that growth this year will surpass the target that I established of five per cent, because we are trending at seven per cent for the year," said Tourism Minister Edmund Bartlett, while speaking at the official opening ceremony of JAPEX 2017 on Sunday. "...and even though we had a little hiccup in the second week of September, we have recovered fully and we are on track."

Sixty-two buyer companies, along with 105 delegates, as well as 246 representatives of 99 supply firms are attending the 27th staging of the sector's premier trade event.

Between August and January, stop over arrivals climbed by 6.9 per cent when compared to the same period last year. Cruise passenger arrivals have increased by 5.1 per cent.

Of the more than 2.8 million visitors, Jamaica earned $1.98 billion or 8.3 per cent in gross foreign exchange earnings, compared to $1.83 billion last year, over the same period.

In March, Bartlett predicted that arrivals will reach 4.2 million this year, which represents a five per cent increase over last year.

According to Prime Minister Andrew Holness, who gave the keynote address, the tourism industry is being positioned to continuously generate higher growth rates in both visitor arrivals and earnings, in response to new demographics and spending patterns.

"Rising tourism numbers are a serious responsibility that calls for serious management," the prime minister said, "Better use of new technologies and innovation, greater education among businesses, tourist and host communities, and closer coordination between public authorities, as well as the public and private sector."

"Tourism intensifies our role as global citizens, stewards and ambassadors, calling us to be architects of a sustainable future," Prime Minister Holness added.