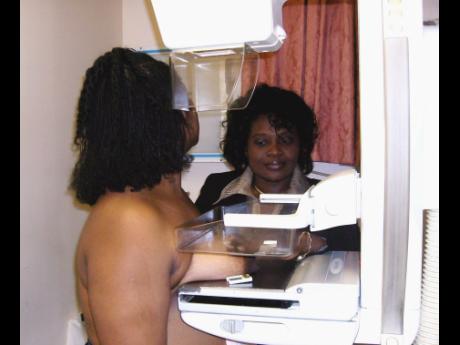 Contributed
A woman is being screened for breast cancer, using the mammogram process.

Data provided by the Statistical Institute of Jamaica and the Registrar General's Department show that the incidence of breast cancer is on the rise in Jamaica.

Breast cancer affects men and women across the social and economic spectrum. However, once diagnosed, those with the economic means, including health insurance, stand a greater chance of a better health outcome, according to the Jamaica Cancer Society. The observation by the Cancer Society has been made over many years of interaction with breast cancer survivors.

Since early diagnosis and testing have been proven to save lives, the screening guidelines as stipulated by the Jamaica Cancer Society are that women conduct monthly breast self-examinations, annual clinical breast examinations, and annual mammograms. If an individual has a family history of breast cancer, that places him or her in the high risk group. It is, therefore, recommended that screening for breast cancer starts earlier. For example, if a first-degree relative (mother, sister, father, brother) was diagnosed with breast cancer at age 45, then screening should begin at age 35 years. Patients are encouraged to discuss their risk with their physicians

Continuing, Tufton said: "We do clinical breast examination on women 20 years and older and recommend breast self-examination in this age group for persons at average risk. For persons at high risk, the guidelines will vary. This is why, as minister, I recommend that all Jamaicans get their regular check-ups every year to discuss their risk and get the required screenings."