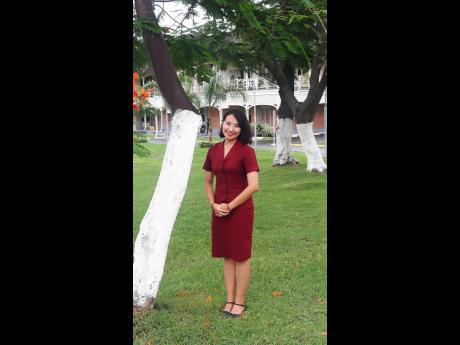 Two years after visiting the island, South Korean national Seryeong Risa Park is now living in Jamaica and attending The Mico University College in Kingston, where she is studying English language and literature.

In 2015, Risa came to Jamaica as a volunteer with the Interna-tional Youth Fellowship (IYF), a Christian-based organi-sation that has branches in more than 80 countries. She engaged in activities they call 'ACADEMY', which encouraged cultural exchange to include teaching Korean music, Korean language and other practices from that country. During that time, Risa fell in love with Jamaica and said she never forgot her experience here.

While visiting the island, she was enrolled at Keimyeong University in a four-year bachelor's degree programme, majoring in English language and literature, but only completed five semesters.

She interacted with President of The Mico University College Dr Asburn Pinnock, who visited South Korea to attend the World Education Leaders Forum in 2016. It was there, as a protocol assistant for Dr Pinnock, that she heard the call for students from South Korea to attend Mico and thought she would take up the offer.

Risa said she is enjoying her classes at Mico and making many friends. She speaks fondly of her love for Jamaican food and listed jerked chicken and stewed peas as her favourite dishes. She has already learned some Patois and promised to learn some more before she leaves.

Since attending Mico, she has started a International Youth Fellowship member club with the mandate of creating young leaders.

"I try to live by the motto of the IYF, which is 'Challenge, Change, Cohesion' and seek also to train my peers to be global leaders," she said.

They will seek to do this through various programmes, such as s cultural exchanges and teaching of the Korean language.

Asked what she will do after the programme ends, she expressed a desire to lecture at The Mico University College as an English teacher, or to become a global speaker of the IYF.