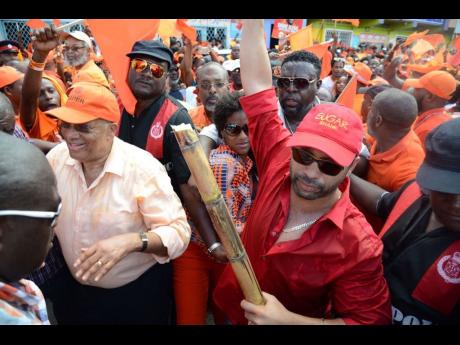 Dr Shane Alexis (with cane in hand) is supported by Dr Peter Phillips (to his left) on Monday, nomination day.

​The governing Jamaica Labour Party (JLP) is blasting the opposition People’s National Party (PNP) for selecting a person without Jamaican citizenship to represent the party in the upcoming by-election in South West St Mary.

At a press conference this afternoon, JLP Member of Parliament, Daryl Vaz, said the selection and subsequent nomination of Dr Shane Alexis shows the hypocrisy of the PNP.

Alexis is not Jamaican but is a Canadian citizen by birth.

As a member of the Commonwealth, Canadians are eligible to enter representative politics in Jamaica.

Vaz argued that his selection is not a legal issue but a moral one.

He questioned how the PNP could seek to put who he termed a foreigner in Parliament.

The MP also took issue with Alexis arguing that he has opted against becoming a naturalised Jamaican, despite having Jamaican parents and a Jamaican wife.

The West Portland MP was one of the parliamentarians who was ousted from office over the matter.

He argued that for the PNP to now select a person without Jamaican citizenship to potentially become the political representative of the people of South West St Mary in Parliament smacks of hypocrisy.