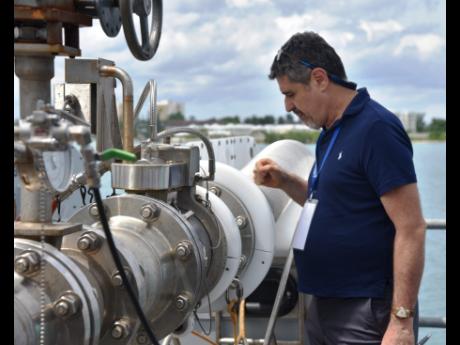 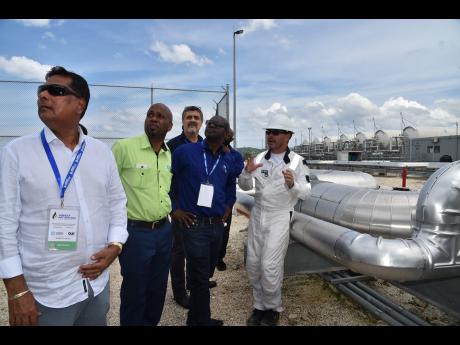 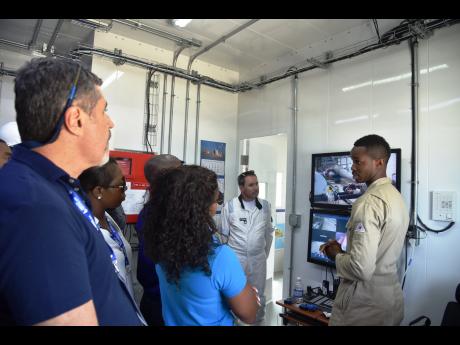 Mark Titus
Danar Royal (right), senior operator for the control room at New Fortress Energy, explains his responsibilities during a tour of the LNG facilities by participants in the inaugural natural gas conference on Friday. He is supported by terminal manager Gregoy Piechowski. 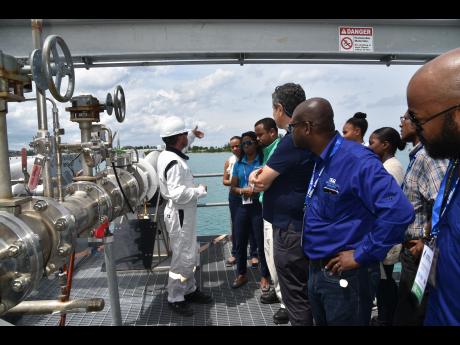 Mark Titus
Gregoy Piechowski (left), manager of the New Fortress Energy LNG terminal, has the attention of the touring party.
1
2
3
4

The decades-old dream of fuel diversification in the Jamaican energy landscape became a reality late last year, thanks to the Office of Utilities Regulation (OUR) and the Jamaica Public Service's (JPS) partnership with United States-based New Fortress Energy.

It was through the intervention of the OUR that the conversion of JPS' existing combined cycle plant to use natural gas was made possible. This conversion project involved the creation of a liquid-gas supply chain: the construction of infrastructure for the receipt and storage of liquefied natural gas (LNG), regasification, and the transportation of natural gas to the Bogue Power Plant. The natural gas is being supplied by New Fortress Energy.

Such a feat did not go unnoticed, in the global energy market and one keen observer of these historic developments was Nelson Garcez, principal of Smart Strategies LLC in the US, who travelled to Jamaica from Brazil to participate in the inaugural natural gas conference that ended with a field trip to western Jamaica for a tour of New Fortress Energy's LNG facility in Montego Bay, St James, on Friday.

"It is an amazing achievement. It's actually the first one in the Caribbean with its ability; others are in the Dominican Republic, but with a different concept," Garcez told The Gleaner after the tour.

"LNG is the way to go for all the Caribbean to reduce energy cost, and this example needs to be given to more countries in the region, as a solution to climate change."

Garcez's business profile boasts of international expertise in mergers, acquisitions, divestitures and joint-ventures, and is currently advising several markets and a few countries in the region.

"I am just here to see what the experiences are and how Jamaica is dealing with the different problems," he said.

"It's very nice to see the full installation, but the devil is in the details," he quipped.

"How they made it happen, how did they get all the commitments from all the parties, [but] it has been very good, because the conference over the last two days has shown a lot of support from the Government and interests from the private sector, and that is what made it possible."

The field trip brought the curtains down on the inaugural three-day event, which was held under the theme 'New horizons: The development of a natural gas sector in Jamaica - prospects and challenges', and saw local participants as well as others from North America, Europe and Caribbean states.

The conference was a collaborative effort between the Petroleum Corporation of Jamaica and the OUR, where focus was placed on the opportunities, benefits, and implications of the introduction of natural gas into Jamaica's energy mix.

In 2015, New Fortress Energy signed a 20-year supply deal with the JPS, investing US$750 million in the construction of the LNG terminal. By November last year, the JPS Bogue power plant began using LNG, achieving a historic milestone for alternative-fuel use in Jamaica.