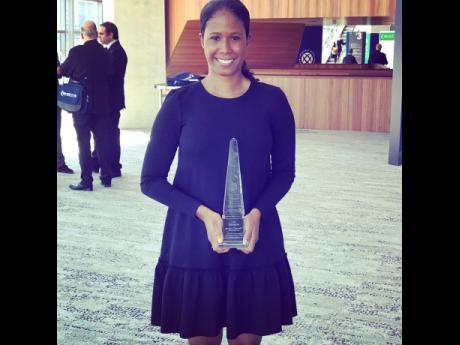 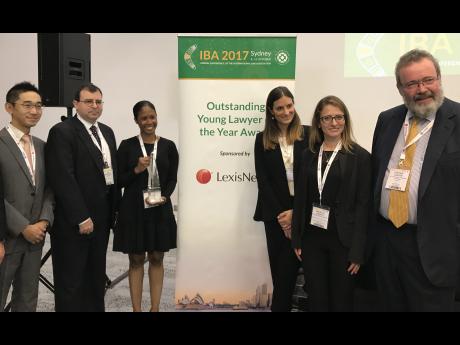 Contributed
Malene Alleyne of Jamaica (third left) with representatives of the International Bar Association and Lexis Nexis after she was voted the Outstanding Young Lawyer of the Year.
1
2

Jamaican human rights lawyer Malene Alleyne is the latest recipient of the prestigious Outstanding Young Lawyer of the Year award from the International Bar Association (IBA).

The award was presented recently at an awards breakfast at the International Convention Centre in Sydney, Australia.

This award is presented annually to a young lawyer who has shown not only excellence in his/her work and achievements in his/her career to date but also a commitment to professional and ethical standards as well as a commitment to the larger community.

"I am honoured to take this award home to Jamaica," said Malene. "This award highlights the important contributions that Caribbean lawyers have made and continue to make to the global community."

Malene received her law degree from the University of the West Indies, Cave Hill, and a Legal Education Certificate of Merit from the Norman Manley Law School in Jamaica.

Before studying law, she obtained a Bachelor of Arts from Eckerd College.

Malene is a former associate at the Jamaican law firm Myers Fletcher and Gordon. She began her human rights career in 2013 when she joined the inter-American Commission on Human Rights in Washington, DC.

"I believe that respect for human rights is the cornerstone of democratic governance," said Malene.

"Human rights must be mainstreamed through every aspect of government, business, and social life. This is the wish I have for Jamaica, the Caribbean and the world."

In 2016, Malene decided to pursue an LLM at Harvard, but she maintained a close connection to human rights practice through her work with the Harvard International Human Rights Clinic and the Harvard Immigration and Refugee Clinical Program.

Highlights of her tenure include assisting a woman from El Salvador to obtain asylum in the United States and presenting submissions to a hearing of the Commission on the Impact of Donald Trump's Executive Orders on Human Rights.

After graduating from Harvard, Malene continued to work with the Harvard International Human Rights Clinic on a case being brought under the Alien Tort Statute against the former president of Bolivia and his minister of defence for their involvement in the commission of extrajudicial killings and crimes against humanity.

This statute allows victims of human rights violations in foreign countries to seek justice in US courts once certain criteria are met.

Malene recently took up a position with the Caribbean Protection Unit of the United Nations High Commissioner for Refugees in Washington.

At Harvard, she wrote her thesis on intersectionality - a framework created by black feminists to analyse the complexity of the discrimination that black women experience.

"When I started working in the United States, I realised that neither race nor gender alone could fully capture the type of discrimination that I experienced.

"Rather, I experienced the intersection of multiple forms of discrimination based on the combination of identities that I represent as a black Jamaican woman. I decided to write about intersectionality to explore how this framework could be meaningfully reflected in human rights praxis," said Malene.

The IBA is the world's leading organisation of international legal practitioners, bar associations and law societies.