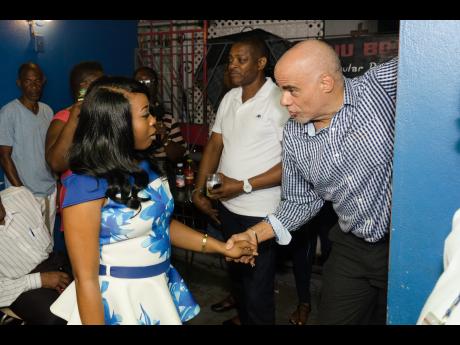 Shorn Hector
EPOC co-chairman Keith Duncan (right) has an encouraging word for Rowena Grace, during The Gleaner's On the Corner forum in Grants Pen, St Andrew last Thursday while other residents look on. 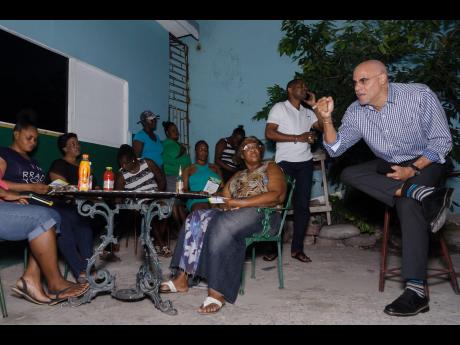 Shorn Hector
EPOC co-chairman Keith Duncan (right) in discussion with some residents of Grants Pen, St Andrew, during a Gleaner On the Corner with EPOC forum last Thursday.
1
2

With the promise of more employment opportunities as the country's economy grows, Grants Pen resident Rowena Grace is calling on the Government to do more to help persons who have left the secondary system but want to further their education.

At a Gleaner On the Corner Forum with the Economic Programme Oversight Committee (EPOC) in the North East St Andrew community last Thursday, co-chairman of the body, Keith Duncan, encouraged residents to position themselves to capitalise on the growth in areas such logistics and the business process outsourcing (BPO) sector.

Grace, however, argued that obtaining the qualifications to take up jobs in these new areas is too expensive for persons such as herself, who have already left the secondary education system.

"Some of us are not working while some are working minimum wage, and to find money out of that to go back to school is very challenging," said the 32-year-old Grace.

"So to try and get the jobs by the ports and the other jobs that are to emerge, we are trying to get the qualifications, but it is expensive, especially for women who have children and have to be going back to school."

Grace outlined that she recently graduated from the Stella Maris Foundation, where she did data operation, but she has been unable to get a job. She is now back in school part-time pursuing the subjects necessary for her to enrol at the University of Technology to study business management.

"But financially, it is hard, because I am not working. A lot of us as big women only have a certain level of education because we dropped out of school from early because of financial difficulties, got pregnant, or some just didn't go to school at all," said Grace.

"So those of us who might have failed in high school, we do need a little help although we are adults. We can't go back to high school to get the subjects, we have to go to a private institution and the subject fees are high.

"So what can be done for some of us who left high school and now want to go back to school so we can position ourselves for those jobs?"

In response, Duncan noted that EPOC's role was to monitor the Government's performance under the three-year International Monetary Fund standby agreement.

He encouraged Grace, and others like her, to remain focused, find creative means and make the necessary sacrifices to get the education needed.

"While any government in any country is supposed to see how the economy best facilitates its human resources so that people can get properly trained and can get jobs, if we have an economy that is hurting sometimes the resources aren't there, so we have to really push ourselves," said Duncan.