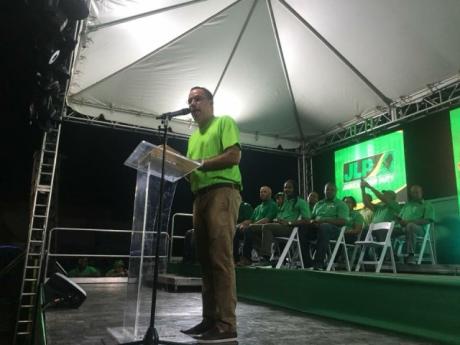 Jamaica Labour Party (JLP) firebrand politician Daryl Vaz launched an invective at the People’s National Party (PNP) and its leader last night in South East St Mary, as the JLP pulled the curtains on its campaign.

In his opening salvo, Vaz, declaring that he was on a mission to burn out 'badmind', criticised the PNP president for not wanting the Junction main road – the subject of public controversy – fixed.

“Him a nuh prime minister, but him a charter helicopter fi come a St Mary,” Vaz added.

Vaz said unlike Phillips, Prime Minister Andrew Holness was walking hills, valleys “and walk through river” to meet with the constituencies of the battleground seat.

The West Portland member of parliament told JLP supporters that the ruling party was not buying votes in the constituency, rejecting a claim that has been repeatedly made on the PNP’s platform throughout the campaign.

“Let me tell you something Peter Phillips, we don’t buy votes, we earn it! We don’t use Trafigura money, we use fresh cash,” an animated Vaz said, sending Labourites into a frenzy, gyrating to Mavado’s 2017 release Fresh Cash.

Vaz, who claimed to be only spending “fresh cash” disclosed that $400,000 was spent on Junior Pen Primary in Enfield in the constituency and two computers handed over to the national library office in Annotto Bay when Holness and JLP candidate, Dr Norman Dunn, visited the areas recently.

Both parties are set to contest the by-election to select a new member of parliament tomorrow.