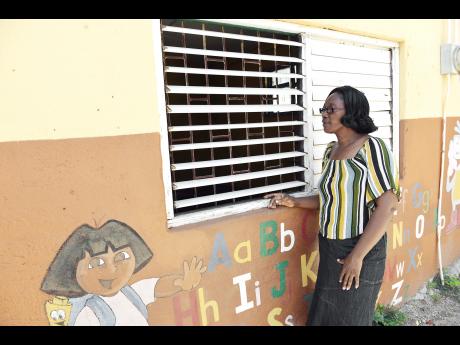 Norman Grindley
Mitchell Facey, principal of the Emmanuel Early Childhood Development Centre, looks into the building she was evicted from after operating there for more than 20 years. 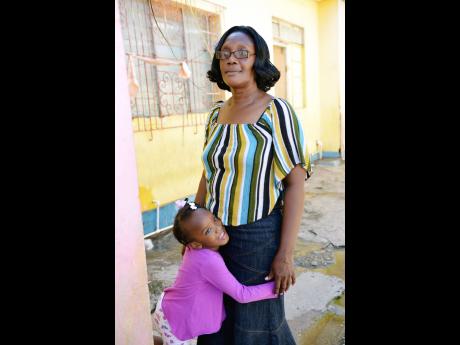 Norman Grindley
Mitchell Facey gets a hug from one of her students. 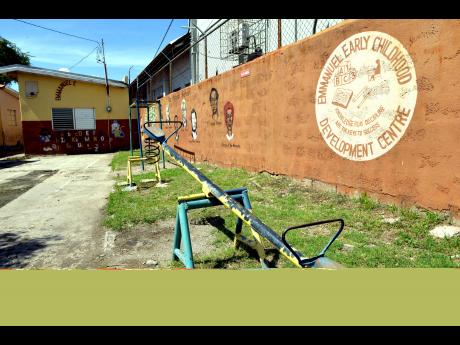 More than 120 infants are out of preschool after the operators of the Emmanuel Early Childhood Development Centre on Studio One Boulevard, Cross Roads, St Andrew, were evicted.

The infants and their parents turned up last Monday to find desks, chairs, and other school supplies on the side of the road.

Principal Mitchell Facey told The Sunday Gleaner that she got permission from a bishop who owned the premises to operate the school there 20 years ago.

Facey said over the years she added four rooms and a bathroom to the original one-room structure.

According to Facey, she received a letter in 2015 stating that the space would be needed, and the bishop advised her that she no longer had to pay the $10,000 monthly rent.

"So we asked if they could give us until the 31st of July of this year because I was sure we would have found a new location by then," said Facey, as she noted that by then the bishop who had given her permission to use the facility had died.

"However, I got a legal document in January of this year that I must go to court in April. Because I was sure of finding a new location I agreed that we would leave by July 31. But coming down to July, the chairman notified us that we could not get the place we had identified again as the Government had sent some children to that school so they had to use up the space they were going to give to us."

PLEADING WITH THE LAWYERS

Instead of requesting more time from the court, Facey contacted the attorneys of the persons in control of the property seeking a stay of the notice to vacate the premises.

"I was pleading to the lawyers to give me six weeks until when school closes so I could make better arrangements, and until now I haven't got a response," said Facey.

She said at the start of the new academic year she informed the parents of the possibility that the school would have to be relocated, but last week some parents who spoke with our news team were less than sympathetic.

"When I went to the school and signed up my child I didn't get any information about them getting any notice or I wouldn't have sent my daughter to the school, knowing the trouble I would have to go through as a parent to buy a different set of uniform and so on," said Shanicka Thompson, whose two-year-old is enrolled at the school.

"It was at the first parent-teacher meeting down in September they talked about getting notice. But then Monday morning she went to school and the kids' stuff were outside, including the stuff we bought for her that were on the book list," added Thompson.

She now faces the daunting task of getting her child into a new early childhood institution and the costs that she will face.

Fellow parent Ophelia Marshall is facing a similar challenge with her three-year-old son.

"I paid $5,500 for the term and bought PE gear and the gear for going out on Fridays, and that's $2,000 each, and all the gear have the school's logo. I bought textbooks, play dough and all those little things, so I will wait," said Marshall.

Last Thursday, Facey told The Sunday Gleaner that she hopes to find a new location in the Cross Roads area this weekend as she wants to reopen the school tomorrow. But if that fails, she will have to use premises in nearby Jones Town, although this is not favoured by many of the parents.