‘Sticky’ flies from Florida to vote for Dunn - JLP winning formula, Labourities registered in SE St Mary but not living there 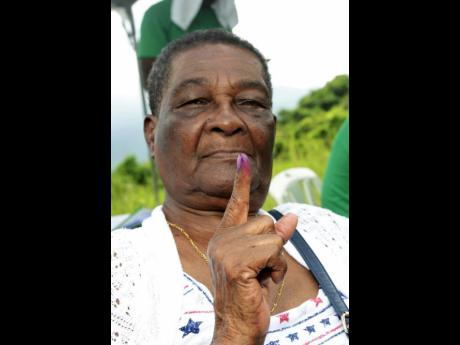 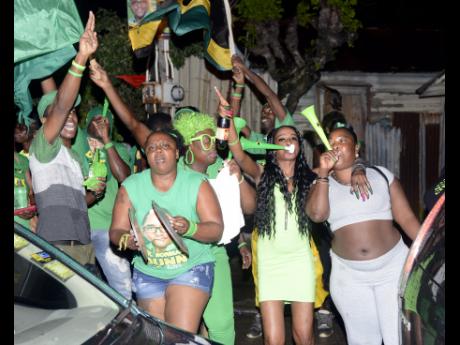 "A next month me did fi come dung you know, but me beg me daughter when me hear about nomination fi send me dung. Me say, 'Sweet, mi want go vote' and Sweet say 'you serious?' And me say 'yes'.

"Him say all right and him go suh bim pon the line and him get the ticket and go suh bim and me come dung last week Sunday and deh a me daughter at Portmore. And them send taxi fi me a Portmore and carry me come yah," said the senior citizen who proudly referred to herself as a 'dutty Labourite' in Belfield Line as she waited in her wheelchair for the results, having long casted her ballot.

Despite the amputation of a leg which has constrained her movements 'Sticky' as she is known to close friends and relatives, remains a loyal and enthusiastic supporter of the JLP, a loyalty she claims is rooted in DNA.

"From the day me born, me born as a dutty Labourite, nobody can't buy my vote. My vote too precious," she declared.

Even though resident in the United States of America, Nelson-Henry's heart is still in her native Belfield, where she is optimistic living conditions will improve under the JLP, even as she warns them against complacency.

"A lot a progress weh used to gwaan and PNP lock it dung. Me would a like fi see if it coulda come up back. Me feel good but me a beg unnu do, work fi Belfield cause if unnu nuh work and mek it slide, PNP a go tek it weh back and we nuh waan dat. Young pickney fi get work, old people fi tek care of [and] pension fi run good," said Nelson Henry.

She said major infrastructure development and rehabilitation is also vital to the JLP retaining the seat, with piped water, proper roads with the requisite drainage system to stop the unending erosion also critical needs for the constituency.

Nelson Henry was among several persons who have their votes registered in South East St Mary but who no longer spend their every day in the constituency, targeted by the JLP in its quest to grab the seat which it had held only once since 1989.

"The first thing we did was a deep analysis of the constituency, which was informed indeed by polling, but the party's secretariat and the leadership of the area council would have also done deep consultations with the workers of the party in each cluster," said one of the JLP's key organisers, Matthew Samuda.

"This informed everything from issues being faced to new voters and out of town voters, wherever they were in a more scientific ways, broader ways when you would have brought in the polls to kind of verify what you were hearing and validate what you hearing from the workers.

"This is because the political workers are among the most passionate set and you don't want passion to override information accuracy. Invariably, it doesn't but it's always helpful to validate such information," added Samuda.

He said the JLP specially targeted persons added to the voters' list after the 2016 election.

"I can't tell you that all 800 new people on the list voted, but I can tell you that organisation was as simple as finding the people that were willing to show their support for you and ensuring that they are able to reach to the (ballot) box," Samuda told The Sunday Gleaner.